Update: 2 young men swept out to sea while swimming at Utumea 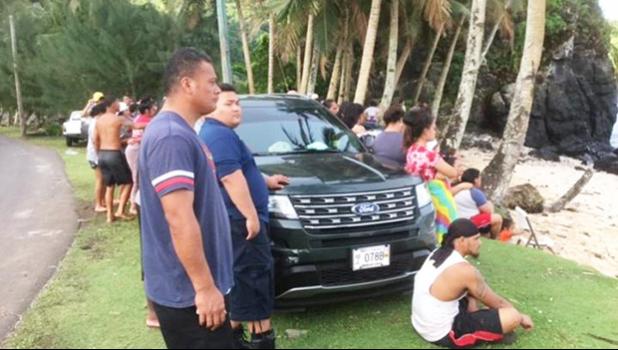 Pago Pago, AMERICAN SAMOA — What was supposed to be a fun and exciting weekend outing turned into tragedy when two young men went missing in the waters of Utumea.

The social media pages for the two missing boys — Alex Peric and Anthony Leota — have been flooded with comments and well wishes from family members and friends.

Samoa News understands that the boys were in Utumea as part of a church picnic and although the boys had found themselves in trouble — strong current and sea conditions — they were still visible to those who were on shore. However, as they were waiting for help to arrive, that’s when they disappeared from view.

Because the incident was reported from a village on the far west side of the island, it took a while for help to arrive. EMS and Marine Patrol responded to the call, including the US Coast Guard. Top DPS officials were also at the scene.

A search ensued for hours and by nightfall, there were no signs of the two boys.

Members of the church group the boys went to the beach with that day, kept praying for their safe return, according to a witness who spoke to Samoa News yesterday. A beautiful ‘sign of hope’ appeared in the sky while the search was on for the two boys. A ‘double rainbow’ formed on the horizon, in the direction where the boys were last seen.

(Sea conditions around the territory were rough over the weekend. On the east side, debris including plastic water bottles, old clothes, and aluminum cans were washed on to the main road by strong waves).

Peric was a star player of the Tafuna High School football team and a member of the Warriors Class of 2019. Leota was a student at Samoana High School.

Samoa News advises the general public to heed the weather bulletins regarding rough seas and high surf; and we pray for comfort for the friends and family members of the two young men who are still missing.