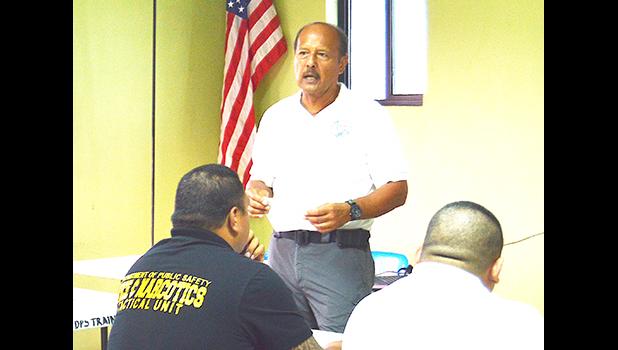 Training to arm local police officers kicked off yesterday morning at the Office of Motor Vehicles (OMV) in Tafuna, under the supervision of Ernest Haleck, who arrived last week from Honolulu, HI.

Thirty-six new and senior police officers from various DPS divisions were selected to be part of the training - including members of the newly established Vice & Narcotics Tactical Unit.

Police Commissioner Le’i Sonny Thompson delivered the opening remarks, welcomed Haleck, and told police officers that the law gives the police commissioner the authority  to ensure this training is conducted thoroughly — step by step — in order for cops to be certified to be armed while performing their duties.

“You have been selected to be part of this training because you are top officers in our field. As you can see, we have experienced a lot of issues in American Samoa — and our job is to protect everyone in the territory — including people who come in everyday,” Le’i said.

He spoke about the continuing argument among leaders and members of the community regarding the arming of police officers and said the law has been there for many years, and it’s time to make it happen.

“There’s no question about how dangerous our job is — but if we can learn everything and get certified — we can put together a good team to protect our country. There are very serious issues around our island today, and we can cure them all if we work together. Like I said, I selected you to be in this group because you are special. I’m not saying that other police officers are not; what I’m saying is that you have been selected because I know you can do better,” Le'i shared.

Haleck will be using the LAPD model for training, which is what he's been using and is different from what is currently being taught in the local police academy.

In an exclusive interview with Samoa News, Le’i said the main reason why police officers need to be trained is to make sure they are well prepared and ready to protect the country if anything happens on our shores.

Le’i noted that during his confirmation hearing before the Fono earlier this year, he was questioned by legislators, whether the police force is ready to respond if there are any serious incidents such as terrorist activities, hostage situations or high risk warrant arrests — and his response was “no, the police are not ready to respond.”

Nine months have passed since he became Police Commissioner and Le’i said many changes have been made within the department, to ensure police officers are ready to fulfill their responsibilities.

According to him, the current training is not because police officers want to carry guns to threaten people or to have war with the public — it’s all about the safety of the people.

“Our roles are to uphold the law and protect our country. We cannot protect the community with empty hands. As you know, things happen. We want to make sure the community is safe and the lives of our sworn police officers are also protected,” he said. “As I keep saying — for the protection of our leaders, elders, the public and everyone in this country — police officers need to be armed and ready to respond at anytime.”

After training, several police officers, including senior staff will be carrying guns while performing their duties 24- 7; while others will be armed “when necessary”.

Le’i said that during his latest visit to other US territories such as CNMI and Guam, he noticed that police officers there are armed while on the field doing their job. “And for us to be out there with nothing is embarrassing, and I think we’re playing with people’s lives. So it’s about time to train and arm our officers."

“My philosophy is to follow the law. Prevention is better than cure. As you know, we are out there day and night, and if anything happens, our officers will respond accordingly. Our motto is to serve and protect. Right now we can serve but if any incidents should pop up” involving weapons, “how can we effectively respond with our bare hands?”

He reiterated, “We want to make sure our police officers are properly trained — mentally and physically — to be able to deal with whatever comes their way and act prudently with this weapon.”

Arming police officers has not been an easy issue for many in the public, including some government leaders. Some believe that arming police won’t address the problem of guns and drugs, while others say the move could lead to increased violence.