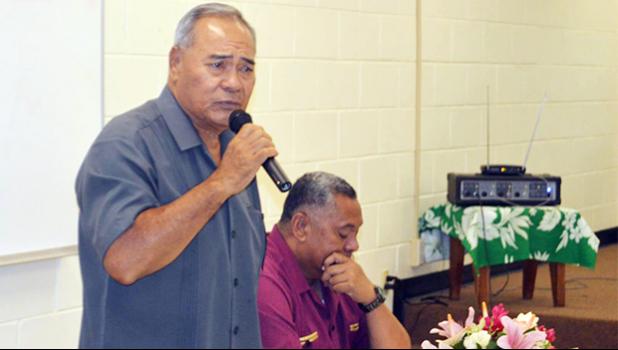 The US Department of Interior, Office of Inspector General (DOI-OIG), in a Sept. 28th audit report determined that ASG did not have effective internal controls over the use of its vehicles.  It found that ASG's vehicle records were inaccurate and incomplete, the ASG had no comprehensive and government-wide policy to regulate and monitor the use of government-owned and leased vehicles, and departments did not adhere to available guidance.

The report made 13 recommendations to “address the deficiencies” in ASG's policy and practices.

In his Aug. 14th response to the draft report, the governor said ASG takes “judicious note of the findings and recommendations”, and he submitted the corrective action plan.

However, the audit report states that while ASG reported that “actions were completed, it did not provide any supporting documentation to verify the actions taken.” (See Samoa News Oct. 4 and 9 editions for details)

At the cabinet meeting, the governor said DOI-OIG concerns raised in the audit report are correct, and the problem is due to “us, as leaders.” Lolo reminded cabinet members about the importance of knowing where their agency’s vehicles are, if they are used by employees, and to remember that there are already policies in place for ASG vehicle use.

He said many vehicles have been out of service for many years, almost 20 years, and directors should conduct an inventory audit and remove those vehicles no longer in operation from the government's list of vehicles.

He said the Governor’s Office, along with Property Management and the Treasury Department are working on firming up the list of ASG vehicles and then update a report for submission to DOI-OIG to address concerns noted.

Lt. Gov. Lemanu Sialega Palepoi Mauga reminded cabinet members that the governor’s letter has gone out and for agencies to provide a complete list of their vehicles by Oct. 31st.

The governor said fiscal year 2019 has began and the approved budget has increments for employees. He said increments should be continued to be used in accordance with what the law states, and the Administration is not holding off on those increments.

During FY 2019 budget hearings, several lawmakers raised the issue of increments included in the budget and requested that the government pay them during the fiscal year, as employees are deserving of getting them.

Another issue raised by the governor, was his recommendation for those agencies funded by federal grants, to fill positions in their offices, if there are vacancies. When it comes to positions funded with local revenues, he said there should first be a thorough review to ensure there’s sufficient funds to hire, and to follow ASG policies in place when it comes to locally funded positions.