Toll in Samoa continues to climb — with 53 deaths now reported 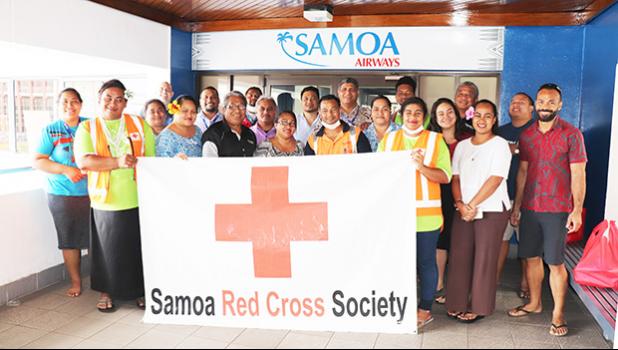 Apia, SAMOA —  To date, 53 measles related deaths have been recorded, with 5 fatalities in the last 24 hours.

The young are the most vulnerable with the following statistics released by the National Emergency Operation Center as follows: Age group of 1- 4 years comprises the greatest amount of reported deaths at 25, with the age group of 6- 11 months next with 15 deaths. The 0- 5 months group is third with 8 fatalities.

The 1- 4 years age group also has the most amount of measles cases reported, with 1,181 compared to the next most vulnerable age group — the 6-11 months at 452 reported cases.

According to the latest update from NEOC, the Ministry of Health confirms a total of 3,728 measles cases reported to the Disease Surveillance Team, since the outbreak started; and there were 198 recorded in the last 24 hours.

The update continues, “the total number of measles cases admitted to all hospitals recorded for the outbreak to date is 1,129. Of that, 893 (79%) patients have been discharged.”

At Lalomanu District Hospital nurse Selwyn Amataga said many parents who had been initially apprehensive about vaccinating their children are now coming forward to ensure they get the jab.

Limited vaccine numbers meant they had to prioritize children, but he said the authorities are quick at supplying more when needed.

And he was relieved 100,000 more vaccines from New Zealand will be arriving soon, but he's worried about the growing number of infections.

There are nearly 200 people with measles who are in-patients at health facilities, and the admissions include 21 critically ill children and two pregnant women.

"We are still not satisfied with the coverage of the six months to the four years. We still haven't crossed 40 percent of that age group," he said.

Locally, the Dept. of Health is yet to officially announce a single confirmed case of measles originating in the territory. This is great news for local residents who have been swarming to DOH health clinics to get their kids vaccinated and up-to-date with their immunization shots.

Effective immediately, all non-resident passengers (incoming travelers) MUST show evidence of measles vaccination at least 14 days prior to their arrival date. Accompanying documents must include: vaccination record showing the person’s name, sex, village, date of dose administration, site of injection, signature of the provider that administered the dose, and signature of the individual who received the dose.

This must also be accompanied by a form from the Ministry of Health (MOH) with a red stamp, signed by Dr. Naseri or Dr. Thompson. Any traveler who fails to provide the aforementioned documents will be denied entry to American Samoa and returned to Samoa, according to DOH.

All American Samoa resident passengers MUST present an immunization record showing that they have completed their MMR shots, or a letter from a physician listing all vaccines received —including the MMR. If not, they will be subject to quarantine at their homes for 7-14 days.

Effective December 5th, all outgoing roundtrip US citizens, residents, and permanent resident travelers with no evidence of immunity against measles must receive 1 dose of MMR 14 days prior to travel to an area with a known measles outbreak.

They must also ensure they are traveling with the yellow immunization card, to be presented upon return. If not, they will be quarantined up to 14 days upon their return. DOH is discouraging any sports, churches, school groups etc. from traveling. Groups that opt to travel anyway will be pre-screened prior to their travel date.

For now, Well Baby Clinics at the Fagaalu and Tafuna Community Health Centers are open to serve the community with immunization shots. MMR shots will be given to all children who have not received their first dose, and those who are due for their second one.

All schools and daycares have been advised not to accept any children whose immunization shots are not up-to-date.

If a person suspects that he/she or anyone in their family is sick with measles, they are advised to call the hotline and stay home, stay hydrated, and take Tylenol for fever. DOH will send a team to their residence.

Something was clearly missing at church services in Samoa this weekend — children.

Father Losi Antonio, of Mulivai Catholic Church in the south of Samoa, said at the start of the service the congregation prayed for those who had lost loved ones to measles as well as those fighting the disease.

Fifty-three people so far have died since the outbreak began — most of them children.

Strict government rules required children to stay at home from Mass, which is a big part of most Samoan's week.

"I asked the parish here to please make the children stay home," he said.

This weekend also marked the start of Advent — the lead-up to Christmas celebrations.

But Father Antonio said that traditional Christmas gatherings have also been cancelled.

"We are heading towards Christmas, a time of happiness, a time of love, a time of joy, but these families are suffering," he said.

Meanwhile, patients are still coming into district hospitals around the country.

One is Lalomanu District Hospital, an hour and a half from Apia.

Registered nurse Selwyn Amataga is in charge of the small hospital, which sits on a hill overlooking the village.

Most of the patients he's seen have recovered, although seven were rushed to Apia hospital.

But he says one of their challenges is managing vaccine supplies.

"We're not out of vaccines right now but we have 60 and we are planning to visit six more villages that we haven't covered yet," he said.

He said the authorities were getting more vaccines out quickly when needed, but he is concerned infection rates are still rising.

More than 3500 people now have measles in Samoa — providing a challenge to already exhausted medical staff.

The Samoa Government announced on Saturday, Nov. 30, that it has doubled its financial commitment to $6 million tala to ensure sufficient funding for the Mass Vaccination Campaign to manage the Measles Crisis.

The additional commitment was approved by Cabinet last week and it will complement the assistance from the international community and Samoa’s key partners.

The announcement was made by Finance Minister Sili Epa Tuioti at a Press Conference Friday to announce other gov’t news as well. He said that Government is also prepared to commit more funds over and above the $6 million if additional funding is needed.

The Samoa government has allocated the money for work around the measles epidemic, as well as to be spent to meet several needs such as upgrading hospitals.

The Prime Minister, Tuila'epa Sa'ilele Malielegaoi, said next month the government would table in Parliament a proposed legislation that would impose penalties against parents who ignored the compulsory vaccination order that had been ordered.

He said Parliament would urgently discuss and pass the legislation in the coming weeks to make sure it became law by January.

NO SUNDAY BREAK FOR NEOC INCLUDING MOBILE CLINICS

While the National Emergency Operation Center in downtown Apia is busy with logistics and and coordination to ensure that no one is  left behind, mobile clinics targeting isolated and hard to get to families also were on the road Sunday, Dec. 1st, going from family to family to administer the measles vaccination doses.

Consent is granted by a parent or guardian before the injections are administered. With infections rising daily, the epidemic is yet to reach the critical inflection point at which the disease stops spreading, according to the Ministry of Health.

Presently there are 18 mobile clinics operating in Upolu and 14 in Savaii not including fixed sites and special booths strategically deployed for easy access by the public.

Apia office staff at Samoa Airways answered the urgent call to action for more blood donations by holding a blood drive at their head office on Friday.

The staff-driven initiative came about after an appeal was made to management about facilitating an opportunity to help make a real and immediate difference by donating blood as a team.

Arrangements were made by management with the Red Cross Society to come on site and collect blood donations, enabling more staff to donate during work hours.

As a result, blood donations were collected from 27 donors at Samoa Airways corporate head office. Red Cross Society volunteer, Visesio Faaleaga said they were more than happy to accommodate the request from Samoa Airways,

“When they asked if we were able to come on site and collect blood donations from their team — we were very touched by the thoughtfulness and giving spirit of our people,” said Faaleaga. “People feel more comfortable when they have friends or colleagues donating alongside them. It’s really good for us to come on site because it’s convenient and encourages more people to donate blood.”

CEO for Samoa Airways, Tupuivao Seiuli Alvin said he was very pleased to see his staff work together to carry out this positive initiative.

“Our people are struggling right now and I feel it like everyone else, as a father it’s very painful to see what is happening. We must all do our part — no action is too small when it comes to working together to help save lives.”

Tupuivao Seiuli also acknowledged the organizations and businesses that helped make the blood drive a success,

“We would like to thank the Hospital Blood Unit and the Samoa Red Cross for making this blood drive possible. We’re also grateful to Aggie Grey’s Catering for their kind support in providing refreshments for our donors.” He said.

“Samoa Airways is working closely with government and the National Emergency Operation Centre (NEOC) — we are on standby, ready to support them whenever they call.”