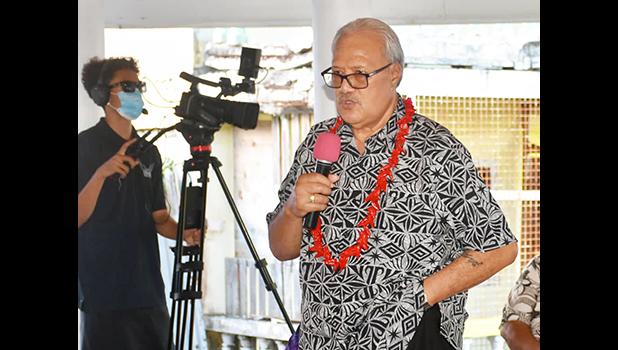 Pago Pago, AMERICAN SAMOA — Secretary of Samoan Affairs Mauga T. Asuega has called for unity from the community standing together with the Administration’s move to start repatriation flights bringing home local residents stranded across the US while LBJ Medical Center says it’s prepared for the repatriation operations.

Mauga made the request during a Senate Hospital/Public Health Committee hearing last week Thursday where he and other COVID-19 task force members, who are also health officials — discussed the repatriation operation with the first flight from Honolulu on Jan. 29th. (See Samoa News edition Jan. 15th for the first story.)

The 160 passengers selected for the first flight are now undergoing the required 10-day quarantine period at the White Sands Hotel in Honolulu, with each passenger also tested for the virus. The next test in quarantine is Jan. 26th, according to health officials.

At the start of the Senate hearing, LBJ chief executive officer, Faumuina John Faumuina informed committee members that the Health Department — which is the front-line for prevention — has accomplished a lot of preparation, along with other support agencies such as LBJ, to ensure the territory remains safe during the repatriation operation.

Faumuina said that LBJ is prepared and ready for the repatriation flights.

Acting Health director Motusa Tuileama Nua echoed Faumuina’s statement saying that they along with their ASG partners have conducted preparations for the past months and all protocols are put in place — starting in Honolulu with tests and quarantine, followed by the arrival here with the required tests and 14-day quarantine period at the Tradewinds Hotel.

Responding to questions from the committee members, Motusa explained the online registration process, where all travelers who apply for repatriation go through the vetting process by the Attorney General’s Office to ensure that the only travelers are local residents stranded off island since borders closed in March.

Also allowed on the repatriation flights are local residents who traveled off island last year on the medical charter flights and are now returning, according to the Health director, who also informed senators that as of last Wednesday morning just over 1,087 people have applied online through the American Samoa Repatriation Program portal.

One of the senators inquired about overall cost of the first repatriation flight, to which Motusa gave an estimate of roughly $1.8 million — which includes the aircraft charter at $270,000, the hotels used for quarantine, food and other needs.

The committee didn’t ask about the cost for Tradewinds Hotel and Motusa didn’t offer up any information.

Motusa did share with senators how DoH plans to use the two ASG quarantine sites that were built last year and located behind Tafuna Community Health Center. Each facility accommodates about 10 beds.

He said one facility will be used to house anyone who tests positive for COVID-19 and the other one is to quarantine those from the DoH Seaport operation at the Port of Pago Pago.

Sen. Soliai Tuipine Fuimaono, who was among senators concerned with launching the repatriation flight, asked if DoH has sufficient medical personnel, to which Motusa responded that every state and other territories are all in a similar situation of not having enough medical staff — doctors and nurses — during these challenging times.

Other senators who joined Soliai with concerns are Sens. Fai’ivae Iuli Godinet and Tuiagamoa Tavai, who pointed out that the territory has remained COVID-19 free due to the suspension of flights and asked if it was the COVID-19 task force who made the decision to start these flights.

At least two other senators asked the same question to which Motusa explained that for several months now, DoH, LBJ and the government as a whole had been preparing for repatriation in the event ASG decided on “repatriation only” but not resuming air service.

He said Gov. Lemanu Peleti Palepoi Sialega Mauga was involved in the previous administration in these preparations. He said these preparations and other information along with the work of the task force, resulted in the decision by the governor and lieutenant governor to start the flights now before something more serious occurs in the US due to this virus that will then affect local residents stranded in the US.

Responding to another question from Tuiagamoa, the acting DoH director said local DoH officials hold daily briefings with the ASG Team in Honolulu sharing information and updates on all the preparations.

However, he said the most “stressful” part of all this is “our own people”, who are calling daily and asking DoH to include relatives and others on the repatriation flight — especially the first flight.

But some of these individuals mentioned — someone’s relative or a church minister — have not even registered online with the program, said Motusa, who again stressed that the final decision on the repatriation flights was made by the governor and lieutenant governor with recommendations from the task force.

He said the online registration portal would remain open until all local residents — including those patients who traveled to Honolulu on the Jan. 13th medical charter — return home, even if it takes up to 8 months.

Sen. Muagututi’a Tauoa said he believes that allowing the repatriation flight will give local officials the opportunity and chance to see where and what needs to be done for improvements in future flights.

With the repatriation operation now activated, there were calls from senators for DoH to get as many members of the community as possible to be vaccinated for COVID-19.

Motusa responded that vaccination continues now targeting persons 65-years and older and it will continue this process following the vaccination tier — or priority — already established by the task force.

The first priority was healthcare workers, first responders and other critical workers and about 90% have already been vaccinated as of last Wednesday.  Health officials told Samoa News yesterday that individuals 16-years and older — which is the general public — will start their vaccinations on Friday, at the the Tafuna Community Health Center.

Senators told the task force members that they all hope and pray that the territory won’t get the coronavirus from allowing the repatriation flights.

At the conclusion of the hearing, Mauga — the Secretary of Affairs — asked the community to stand together and unite in this operation to return home local residents, who have been away from their families for a long time.

Meanwhile, vaccinations for senators were scheduled for this past Monday at LBJ, according to an announcement during last Friday’s Senate session.