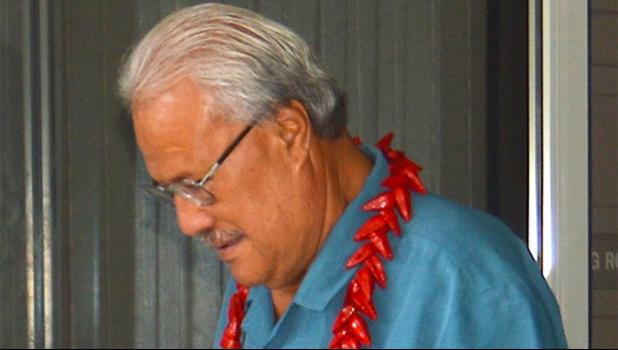 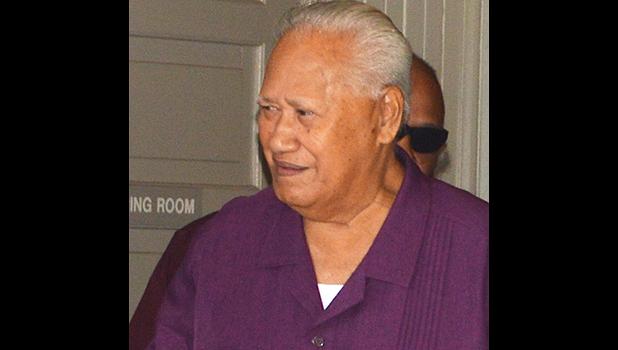 Pago Pago, AMERICAN SAMOA — The battle between Pago Pago Village Council (PPVC) and High Talking Chief Tuaolo Meko Aiumu is now before the Land and Title Division of the High Court of American Samoa. The second hearing for this matter was called on Thursday last week, and is now continued for another 45 days.

The matter reached the court when Tuaolo’s name was removed by the PPVC from the list of families who are receiving monetary shares from the National Park land lease agreement.

For that reason Tuaolo through his attorney, Togiola T. A Tulafono filed a petition asking the court for a preliminary injunction to stop the PPVC from continuing the process of delisting from the land lease they submitted to the court, until the case is heard and they get into the merit of the delisting — in this case Tuaolo — and the authority of the Village Council to change the original lease.

Charles Alailima is the attorney for PPVC and was just retained last week.

When the case was called, Alailima first asked the court for clarification, whether the matter will proceed under the National Park or the Land and Title rules. Kruse responded, “I don’t know, you tell me.”

Since Alailima was not retained as counsel for PPVC when the first hearing on this matter was called last month, Kruse asked Togiola to recap for the court the last hearing.

Togiola stated to the court that Tuaolo was called to testify, where he told the court that he is a registered matai for Pago Pago Village Council (PPVC). According to Togiola, Mauga was also called to the stand but he requested more time to discuss the issue with the village council, and the court gave him that opportunity.

Alailima then told the court that the PPVC did not contest that Tuaolo is a registered matai, but the real issue as to why the matter was before the court, as the PPVC has the authority to delist him from the lease agreement. He then called Tuaolo to the stand to testify.

While on the witness stand, Tuaolo, after introducing himself for the records, told the court that it was about over ten years since he became a registered matai of Pago Pago.

“During that time when you become a registered matai up until now, did you receive money from the National Park lease agreement?” Alalima asked.

Alailima asked Tuaolo if he understands the village council made the decision to remove his name was removed from the lease agreement; and Tuaolo responded, “Yes.”

Tuaolo stated that based on his understanding, as an active member of the village council, he’s entitled to a part of the share from the lease agreement.

“Do you know whether she still received any share from the lease agreement when she was removed from the village council?” Alailima asked. Tuaolo replied, “I don’t have any business to look into that matter.”

“In this matter, you dispute because you feel that you also have (a right to) a share from the lease agreement?” Alailima asked. Tuaolo’s response was, “That’s correct. The total of families that should receive shares from the National Park lease agreement is 12, not 11 as stated by PPVC.”

Alailima changed the subject, asking the witness if Chief Pulu [Ae Ae Jr] came to him trying to resolve the matter with the village council.

“Pulu came four times, and I don’t know whether he was acting on behalf of the village council or not. He just told me that Mauga wanted me to come so we could talk about this matter but I said no, the issue is now before the court,” Tuaolo replied.

Kruse then stopped the proceedings and called counsels to the bench. After a brief discussion at the bench, the court then called a recess and the meeting between the judges and the counsels continued in chambers.

DECISION OF THE COURT

After the court meeting in chambers with counsels, the court issued an interim order for a further continuance in the matter, based on the fact that Alailima had just been retained by PPVC.

“The matter is in court, so the dispute will be resolve according to the process of the court, unless the parties are able to come to a settlement through counsels,” Kruse said.

“What was revealed this morning was a settlement attempted by one party directly to the other side without the involvement of his lawyer, which is not the way we do things when matters come before the court.

“A normal situation when lawyers are involved, one party going to the other party directly and avoiding that party’s lawyer is a transgression that is subject to legal consequences.”

The court went on to say that now with counsel Alailima’s involvement, there is a communication link with the other side and if the sides want to look at a settlement, it must be done through counsel.

“Counsel Alailima was not here when this matter was first heard and he needs time to come up to speed through the records filed with the clerks office.”

The two interim orders from the court are: (1) “This matter is continued for 45 days, and counsels will file a report to the court on the status of this matter”, and (2) “This is the order from the presiding Judge pursuant to statues being provided to us, the status quo will remain in effect until other order of the court.”

Tuaolo did not wish to make a statement when approached by Samoa News outside of the courthouse immediately after the hearing, but Mauga did.

When Samoa News asked Mauga if he’s thinking of calling a meeting with Tuaolo to reconcile differences, he said, “Yes, I’m planning to do something to make sure the differences will come to an end and both sides will reconcile according to our culture and Samoan way.”

According to information obtained by Samoa News from several members of the PPVC, the matter that is now before the court likely stems from a long battle between Paramount Chief Mauga and Tuaolo.

The battle started from a disagreement between members of the Pago Pago CCCAS Church back in 2016, where both Mauga and Tuaolo are members.

According to some who claim knowledge about the situation, the battle inside the church did not end there, but continued to flow out into the village, where Mauga allegedly took the matter into his own hands and make a decision to remove the title of County Chief from Tuaolo without any solid ground that supported this decision.

Samoa News was present during the Eastern District meeting in December 2016 at Mauga guest’s house in Pago Pago, where Mauga kicked Tuaolo out of the meeting, by instructed him to go outside of the house because he was no long considered a matai of PPVC.

In his response before he left the meeting, Tuaolo told Mauga he has no authority to kick him out of the meeting, but out of respect and wanting to keep the peace, he complied.