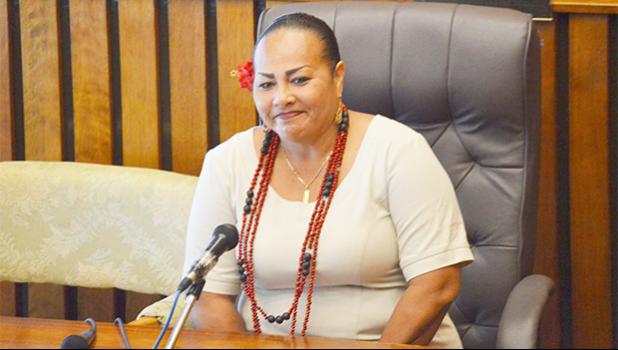 While Gov. Lolo Matalasi Moliga has already proposed recommendations to the Immigration Board on additional steps to be taken in the vetting process for foreigners entering the territory, Immigration Board chairwoman Fanene Edda Wyberski told Samoa News that the Board is taking the matter very seriously, and they have denied a lot of applications from several businesses on island, who use the ‘special provision’ under the Immigration Law to hire foreigners to take jobs in the territory, because they say or believe local people can't fill them.

In an exclusive interview with Samoa News last Friday, Fanene explained that the Board is pressing hard on this issue, because they feel it is their duty to enforce the law and protect jobs for our own people.

“I confirm that the Board has denied a lot of applications from some of our local businesses who want to hire people from other countries, especially Asian nations, to come and work here; and most of the applications we denied are for those who are brought in to do simple tasks such as cooking, shelf stocking, sewing etc. — but these are not special skills. Most of our own people can do these jobs, so why are we opening the door to foreigners to come in and take jobs and money from us when there are a lot of local intelligent young people who have graduated from high school and college who are still looking for jobs,” said Fanene.

“The Board believes it is our duty to protect jobs for our people, protect our economy, and protect our law and our country,” she continued.

American Samoa is the only US territory that controls its own borders when it comes to immigration and customs.

According to Fanene, the problem with the ‘special provision’ under the Immigration Law has been there for many years but nothing has been done to remedy it. It has been used by some local businesses in the past, as a way to bring their own people to work and develop their families in the territory; but the ‘special provision’ is specifically for those who have special skills that are not found in American Samoa.

“Every time the Board reviewed application files, we found out that most of these people from Asia — whom our local businesses are trying to bring in — will do easy jobs, and a lot of our own people can do these jobs,” said Fanene, adding that the Board is now putting a stop to this practice because they feel it's about time for everyone to contribute their services and time for our people and the government by doing the right thing.

In order to enforce the law and to make sure that only people with special skills are eligible under the 'special provision', the Board is now requiring additional information from each applicant when they apply for a certain job, such as copies of certificates and confirmation letters from their previous employers, to fully support their application and to ensure that this person has special skills for the given job.

“We’re not trying to make things harder for our local businesses or trying to tell everyone that we are the Board and we have the power to accept or deny any applications. All we want is to make sure that everyone is abiding the law, and it is our duty to enforce it, because if we’re not doing our job then who is going to do it? And if we don’t start today, when are we going to?" Fanene asked.

As a business owner herself, Fanene believes that the 'special provision' under local law is a privilege that our government is giving to outside people, a way for them to come to American Samoa and develop their families. Some of the people coming in under the 'special provision' have more privileges than locals who were born and raised in the territory.

“While the Board has been really hard on this issue since we were appointed by the Governor and confirmed by the Fono, we’re receiving a lot of hits from some of our own people and local businesses whose applications have been denied, accusing us in many ways, while others are calling us names and acting out disrespectfully.

"We’re not in the position of starting a war with them, but as long as we are doing our job and protecting the law of our land, then we’re happy,” Fanene continued.

Although several applications have been denied, Fanene confirmed that the Board has accepted a few applications to bring families of foreigners, who have been working in American Samoa for a long period of time, under contract with their sponsors.

These include doctors and other specialists who are working for the LBJ Hospital under long-term contracts. After reviewing each application, according to Fanene, the Board agreed to approve applications to bring in the families of these people who have been living apart for a long period of time, under the condition that they must all leave the territory when the contract expires.

As one of the new board members, Afalava told lawmakers that one of his concerns is that some local businesses are using the special provision to bring foreigners and their families to work and live here in the territory.

“We need to do something now to stop this practice, and the only way we can stop this is to amend the law,” said Afalava.

Savali told Afalava that it is the duty of the Board to review all applications and make decisions, and if they feel that something is wrong with the applications, they have to do something to deny it.

“You’re a lawmaker and if you feel that the law needs to be changed, submit a bill to the Fono to amend the law; but it's really sad to hear that you’re voicing your concerns about this issue after you and the Board made the decision to accept applications to bring outside people with their families under the special provision,” said Savali.

Speaking at the Fono joint session last month, Lolo said he had discussions with local leaders and has come up with possible recommendations to the Attorney General and the Immigration Board on further improving the vetting process for foreigners seeking to enter the territory, and to fully enforce such requirements on foreigners from countries such as the Philippines, China, and other east Asian nations.

He said the current entry permit law only requires a foreigner to have a round trip ticket to and from American Samoa.

Fanene echoed Lolo’s comments, saying the Board is prepared to present to the Governor new policies they have developed, to strengthen the current entry permit law, and to help control the problem of overstayers in the territory.