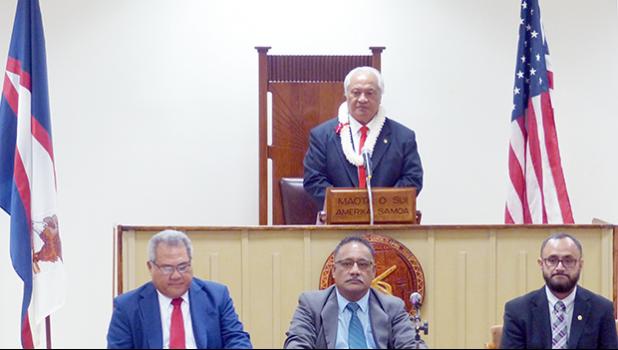 Uiagalelei outlined the action in a July 13th letter to Gov. Lolo Matalasi Moliga saying this policy will be cancelled if the borders re-open before the Nov. 3rd general election. The action also allows possible candidates for the general election to have a representative file the require petition and documents for candidacy. (See Samoa News edition July 20th for details.)

“While most can agree that, given the surge in COVID-19 infections in the U.S., we should keep our borders closed, we cannot and should not violate the statutes that guide our elections by adding a process that is not prescribed or proscribed by law,” wrote Savali in a July 28th letter to the governor seeking “clarity” on Uiagalelei’s action.

Savali points to local law — 6.1101 A.S.C.A — which provides a list of qualified electors who can vote by absentee ballot and that list does not include persons who are unable to return because of government action.

He also noted another law —  6.1102  A.S.C.A — which identifies who may vote by absentee locally and the process on how to receive and cast that ballot.

“I think it prudent to also point out in this letter that the emergency powers granted to the Governor or the Director and the Department of Health” in Titles 13 and 16 of the A.S.C.A “do not authorize the unilateral amending” of the two election laws —  6.1101 and 6.1102, according to the Speaker’s letter.

“That requires the proper passage of legislation by the Legislature and your approval,” he wrote to the governor.

Based on these reasons, Savali requested that Uiagalelei “immediately retract his notice granting absentee ballots to registered voters stranded by border closures.”

Under current law, those voting absentee ballot from off island are registered voters in the uniformed services, local students attending institution of higher education, ASG employees and those employed with the federal government.

Savali’s letter comes after he and some lawmakers  — both in the House and Senate — have raised similar questions on the legality of Uiagalelei’s authority to amend the voting law, which they argue can only be done through legislative action.