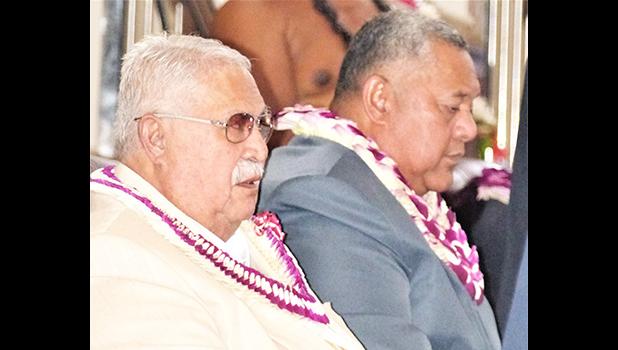 Pago Pago, AMERICAN SAMOA — Senate President Tuaolo Manaia Fruean has called on the Lemanu Administration to look at increasing the contribution rate to the ASG Retirement Fund, saying that more is being paid out from the fund than the incoming monthly contribution.

Tuaolo, who is also a member of the ASG Employee Fund Board of Trustees, made the request in his response to Gov. Lemanu Peleti Palepoi Sialega Mauga’s State of the Territory Address during the joint Fono session on Monday at the Gov. Rex Lee Auditorium.

The current contribution rate to the Fund is 11% — broken down to 8% by the employer and 3% by the employee — but this rate has been described by some lawmakers in the past as inadequate because there is more money going out than money coming in. Lawmakers last year also voiced concerns over the increase in the “unfunded liability”.

Speaking at Monday’s joint session, Tuaolo informed Lemanu — as well as the audience —  the 11% total contribution rate brings in about $800,000 a month while payout totals $2 million. He pointed out that revenue the Fund collects from its investments covers the rest of the money needed for payouts.

He called on the governor not be afraid to make changes for the betterment of the Fund, which benefits current and future members. And Tuaolo explained that when the Fund was first established a long time ago, the salaries were at $500 or $600 a month but now the minimum salary is $2,000.

A May 2020 actuary report of the Fund by SageView Consulting Group pointed out that a 2% cost-of-living (COLA) increase was granted to all retirees effective Mar. 1, 2019 and that the impact of this change was an increase of more than $2.86 million in accrued liability.

“We believe the policy rate of 8% in conjunction with employee contributions of 3% (11% total) is sufficient to support the benefits and administrative expenses of the Fund in the short term, however in the absence of unanticipated strong market performance this combined contribution rate does not appear to be sufficient in the long term,” the same report said.

Meanwhile, Tuaolo told senators on Tuesday that the Fund’s Board of Trustee was scheduled to hold a virtual meeting via Zoom yesterday with off island officials and others involved in the Fund to find out the status of the Fund as the new year begins.

He said he would share the outcome of the meeting with the Senate this week.