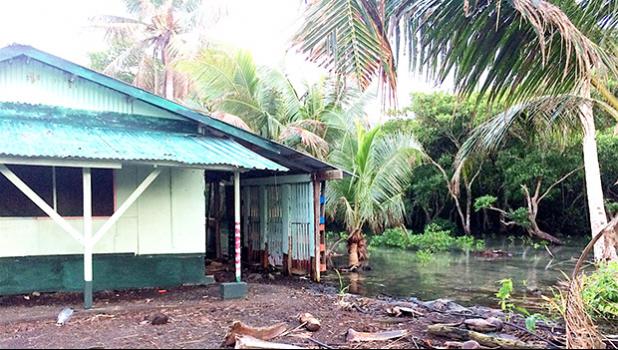 Pago Pago, AMERICAN SAMOA — Did your village experience flooding in early July? Many residents noticed the extremely high tides around our coasts in early and late July (June 30 – July 6, and July 31 – August 2). Areas on the south and east-facing portions of our islands experienced the worst flooding in early July because of the strong winds and large waves from the east and south.

While we are used to seeing two high and two low tides each day, these extreme tides were much higher than a normal high tide, and are known as “King Tides” due to being the highest tides of the year.

King Tides typically occur in the cool season of June and July, and hot season of December and January when we have full and new moons. King Tides happen when the moon is at its closest point to the Earth in its monthly orbit, making its gravitational pull stronger, which causes tides with extreme highs and lows.

This is what creates all “spring tides”, or larger tidal ranges. What makes King Tides so high is the alignment of the sun the moon and the Earth, which means that the sun and moon’s individual gravitational pulls work together to produce the highest high tides of the year.

While King Tides are a normal, naturally occurring event, the flooding they cause is getting worse worldwide due to rising sea levels. Flooding from King Tides is impacting many Pacific islands through coastal flooding, through salt water intruding into freshwater resources and making drinking water salty, or through causing groundwater to flood interior parts of the islands.

We have seen coastal flooding and increased salt-water intrusion into our groundwater (drinking water source) from King Tides over time here in American Samoa.

Although impacts from King Tides are not unique to American Samoa, our islands face an additional threat that causes these impacts to be worse — subsidence.

Current predictions are for this subsidence to continue throughout the century, resulting in American Samoa sinking by approximately 0.3-0.4m (1–1.25 feet). This subsidence means that American Samoa faces a relative sea level rise rate of five times the global average. The current global sea level rise projection from the Intergovernmental Panel on Climate Change is about 0.5-1m (1.6-3.2 feet) by 2100.

What can we do to prepare for these impacts?

Given that American Samoa’s islands have limited land flat enough to live on, most of which is coastal, our best defense against increased coastal erosion is to help nature’s most effective barriers — our coral reefs. While direct restoration efforts, such as growing coral in nurseries and planting it back on the reef, are being tried in several pilot projects, there are also many things we can do in our everyday lives to help.

By cleaning up our village streams, we can ensure trash doesn’t make it out to our ocean, where it smothers and kills coral. We can help keep our stream water clean by not dumping chemicals or household wastewater in them, or using chemicals like pesticides, fertilizers, etc. near streams. We can help our lagoons stay healthy by not cutting or removing mangrove trees, and helping to replant mangroves as these are very good at holding the land in place. And, we can keep our reef ecosystems healthy by not taking too many fish, which are very important to healthy reefs.

To view photos of past King Tides or submit photos of King Tides impacts in your village, please visit www.PacificIslandsKingTides.org to learn more about the Hawai‘i Sea Grant King Tides Project.

The photos on the site provide a window into the future of how sea level rise will impact local shorelines and are an important resource for helping us better understand and plan for climate change.

Contact Kelley Anderson Tagarino with any further questions at KelleyAT@hawaii.edu or call 699-3353/258-2967.