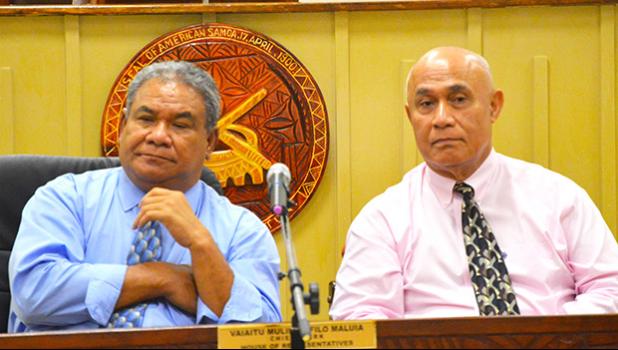 However continue to lament shortfall of contributions to monthly benefit payouts
By
Ausage Fausia
ausage@samoanews.com

Pago Pago, AMERICAN SAMOA — The ASG Employees’ Retirement Fund (ASGERF) will be considering a Cost of Living Adjustment (COLA) for retirees sometime this year. There are enough funds in the Trust to cover a COLA for retirees, according to ASGERF officials, during a hearing yesterday before the House Retirement Committee.

Chaired by Rep. Vailoata Eteuati Amituana’i, Retirement Fund Board Chairman, Va’anatiu Iafeta Tofala and ASGERF executive director, I’aulualo Talia Fa’afetai, appeared before the House Retirement Committee for the hearing that was called after Rep. Timusa Tini Lam Yuen told House members last week that a number of retirees in his district are asking why the ASGERF still has a freeze on the COLA, but the cost of living is high.

Timusa said the retirement fund is not only for government employees who are still working, but also for those who have retired.

“The retirees deserve to have the COLA, and I think that's the reason why they are so desperate to know why the Board is still freezing the benefit they deserve,” Timusa said.

According to Vaanatiu, the Board decided to move forward with the COLA during its February meeting, when the report showed that the investment in the Fund is in good standing. He reminded the committee that the reason why a freeze on the COLA went into effect last year was because ASG and employee contributions to the Fund fell short of benefit payments to members.

I’aulualo echoed Va’anatiu’s testimony and said the monthly payout is more than $2 million, which is higher than the $800,000 in contributions collected every month and because of that, the ASGERF has to borrow around $1.5 million from the Fund to offset the total payout every month.

He said in order for the ASGERF to meet the monthly payout, there is a need to increase the contributions.

He added that the value of the Fund since the beginning of this year was about $210 million.

Rep. Vailiuama Steve Leasiolagi asked the witnesses whether the ASGERF can afford to fund the COLA, and I’aulualo said yes.

“There is enough money to cover our monthly payouts, but our main concern is the future of the Fund. We have to make sure there's enough in the Fund for our future generation, but we have enough for the time being,” I’aulualo said.

Manu’a Rep. Vesi Talalelei Fautanu Jr. said one of his concerns is the increasing number of people who retire every year, and from what he understands, the higher the number of retirees, the more money the ASGERF needs to fund the monthly payout.

The ASFERF executive director explained that almost 3,000 retirees are receiving benefits monthly, and the reason why there are many people receiving retirement checks, is because people are living longer.

He added that the number of retirees also reflect those who are on early retirement due to an illness or disability.

I’aulualo told the committee that the average retiree benefit right now is about $2,000 a month; but in years passed the average was only $500.

He said the increase in the benefit amount is because most people retire with high salaries so they receive higher benefits.

In order to increase the money in the Fund, I’aulualo said one of the options is to hike contributions from both employees and employers; but the Fono needs to pass the Board’s proposal.

A House bill, introduced yesterday, seeks to increase member contributions to the ASGERF. According to the bill, which is sponsored by 11 lawmakers, “each member of the Fund shall contribute to the Fund each fund-year 5 percent of compensation earned and accruing to each member during that year.”