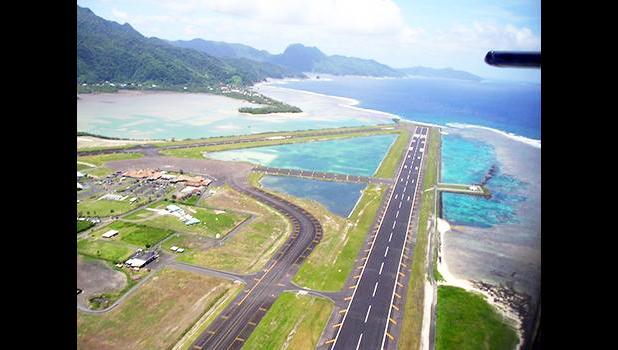 Pago Pago, AMERICAN SAMOA — Airport surveillance cameras, upgrade to the  conveyer belt, runway shoreline protection and parking lot expansion, are some of the current and ongoing projects for Pago Pago International Airport, according to a Port Administration Department presentation at a recent cabinet meeting.

During a powerpoint presentation, airport manager Tavita Fuimaono presented on current projects, including the biggest one - which has been the subject of many news media reports as well as Fono hearings - the multi-million federally funded Airport Apron Rehabilitation project being carried out in phases.

Phase 1, currently underway, is contracted to McConnell Dowell; Phase 2-4 to Paramount Builders. Phase 5 and the contractor for that portion will be announced at a later date.

Fuimaono explained that Phase One is connected to Phase 2, which is the relocation of the airport fuel tanks to its new site just outside of the airport fence at Lions Park - near Pala Lagoon.  Phase 2 is also ongoing.

Once the fuel tanks relocation project is complete, Port Administration will move to expand the airport parking lot, to the area that is currently occupied by the fuel tanks.

Fuimaono says the design for the Airport Parking Expansion has been awarded to AECOM and funded by the Federal Aviation Administration. He said design is 30% completed, adding that the Port Administration director is looking at a request made to her office for the establishment of a facility for funerals that arrive and depart in and out of the Tafuna airport.

The Port Administration presentation revealed plans for installing surveillance cameras  at various locations at the Tafuna airport, including the arrival area. The project was awarded to Pago Tech Inc.,at a cost of $68,000 funded by ASG. It’s to be completed by the end of next month.

The $500,000 project is funded with money collected under the passenger facility fee (PFC) - which is $4.50 per passenger.

The work has been awarded to Glidepath Limited which Fuimaono told cabinet members is the same contractor that upgraded the conveyer belt at Faleolo International Airport in Samoa.

Fuimaono said Port is awaiting parts for the project, therefore no date is set for when it is to be completed.

SUMMARY OF OTHER CURRENT PROJECTS:

• Shoreline protection for the airport runway facing Pala Lagoon. The project falls under the runway safety area and a permit is required first from the US Army Corps of Engineer for the $580,000 project, funded by the FAA. Work is currently being carried out for the design.

• Fire trucks for Fitiuta and Ofu airports. A company called SWG is contracted to conduct a search and identify the best type of truck for the two domestic airports. Fuimaono says SWG had previously conducted similar work for the airports in Guam and the Northern Mariana Islands.

• Pavement Management Plan for all three airports. The plan - which is funded by the FAA - covers issues such as maintenance for the pavement used for the runways as well as ways to improve the pavement to ensure a longer life span. Port Administration plans to start this project next year.