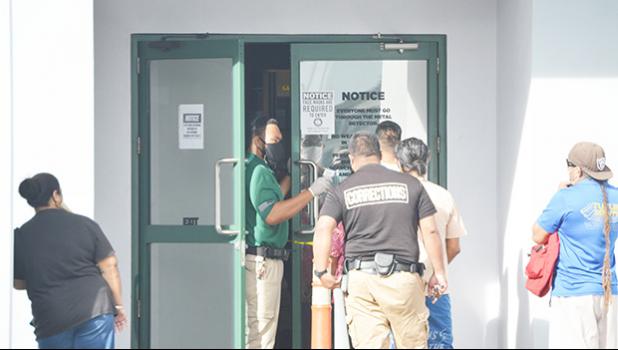 Pago Pago, AMERICAN SAMOA — A man was taken into custody after a court marshal allegedly discovered in his possession a glass pipe and cut up straws, both containing a quantity of white crystalline substance, during the man’s visit to the district court house to see his probation officer.

Detectives of the DPS Vice and Narcotic Unit (VNU) were immediately notified about the situation and later took over the investigation. A senior police officer confirmed to Samoa News that the man was questioned regarding the incident and was later taken into custody for 48 hours to await the warrant for his arrest.

Samoa News was told that the man was a probationer, who went to District Court this past Tuesday morning to see his probation officer for his monthly visit. The man did not wear a face mask when he first appear at the marshal’s check point, so he was advised by a court marshal that he can not enter until he has on a face mask.

The man left and after few minutes, he returned with a face mask. He was then allowed by a court marshal to enter the court, however, he had to go through the checkpoint before he entered.

It was while the marshal was going through the items that the marshal was shocked when the man told him, “Please, handle the stuff with care and don’t break my pipe wrapped inside the brown paper.”

During the search, the marshal discovered a glass pipe containing white crystalline substance wrapped inside brown paper. That is when the marshal instructed the man to step to the side of and later escorted him inside the marshal’s office for a further search.

During a body search, a cut up straw containing white crystalline substance was discovered inside one of his pockets. The glass pipe and the cut up straws were both confiscated and handed over to detectives of the VNU. The defendant was later transported to the Fagatogo Central Police for further investigation.