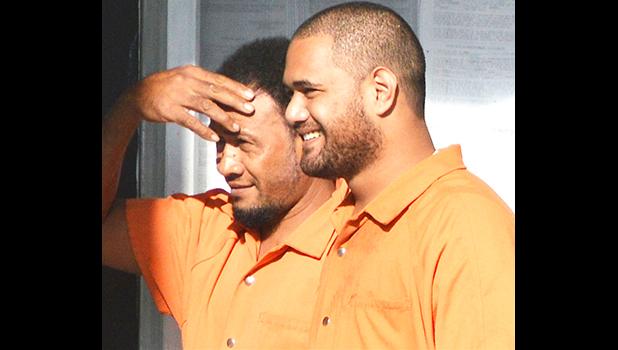 Pago Pago, AMERICAN SAMOA — Chief Justice Michael Kruse has made changes to the bond amounts required to release two men who were arrested during the weekend on allegations that they violated conditions of their probation.

Lafaele Sefo was out on a $5,000 surety bond; but Kruse has changed it to a cash bond of $10,000. Methodist Kuka Mika on the other hand is now held without bail, pursuant to a bench warrant from the court.

Both men made their initial appearances in High Court yesterday morning on contempt of court order charges, and their cases have been continued to Oct. 5, 2018.

Kruse told both defendants that his court marshals have had a hard time locating them over the past few months. So to avoid that from happening again, the court has to amend their bonds to ensure they are in court during their scheduled hearings.

Kruse told both defendants that they were given chances the first time, but it seems as if they don’t want to change.

Sefo appeared in High Court pursuant to a bench warrant issued by the court on May 2, 2018, after he failed to appear for his pretrial conference. The government also filed a motion to revoke bond for the defendant.

When Sefo’s case was called, Kruse asked White whether his client has an explanation about where he was. White said Sefo is not ready to speak about why he did not come to court when his case was called.

Kruse then ordered bail at $10,000 for the defendant, and it will be cash. He added that the court will not touch the $5,000 cash the defendant has already posted.

Samoa News overheard Sefo telling White before his case was called that he did appear in court on May 2, but his attorney at the time, [Public Defender Douglas] Fiaui told him to go back home, and he will contact him on when his next court hearing will be. Sefo further told White that Fiaui never called him to tell him about his next court hearing, and he was also unaware that Fiaui has resigned from the Public Defender's Office.

Sefo was arrested earlier this year in January and charged with unlawful possession of a controlled substance (methamphetamine). During his initial appearance, Judge Fiti Sunia set Sefo’s bond at $5,000 surety, under the condition that he make all of his court appearances and remain alcohol and drug free.

After waiving his right on a preliminary examination, Sefo appeared in High Court on Jan. 19, 2018 for arraignment, and his pretrial conference was set for Mar. 2, 2018.

When Sefo failed to appear on that day, Kruse ordered a bench warrant to be issued for his arrest, and he was to be remanded to custody without bail, his bond forfeited.

At around 2 p.m. that same day, Mar. 2nd, Sefo showed up at the High Court, where he was served with the bench warrant and transferred to jail. When his case was called on Monday, Mar. 5th, Sefo was present in handcuffs.

His attorney that day was Public Defender Douglas Fiaui, who asked the court to quash the warrant and set aside the forfeiture of bond. Fiaui explained that his office failed to communicate with Sefo about his hearing date, and it’s unfair for Sefo to be punished for the PD office’s mistake.

During the hearing, Kruse had a lot of questions for the defendant. He wanted to know where Sefo lives, what he does for a living, who posted his bond, and who the matai of his family is.

Sefo told Kruse that he’s a farmer, working on the plantation of a man named Fa’afetai Lefatia. He said Fa’afetai’s wife, Tumuatasi Lefatia put up the money for his bail, and Talamoa Paulo is the sa’o of his family.

Kruse said all of the names Sefo mentioned “ring a bell”.

He then accepted the defense’s request to quash the warrant for Sefo, and to reinstate his posted bond. He also ordered Sefo to sign in at the PD's office every Monday at 1 p.m. to make sure he is aware of all his court dates. Kruse then told Sefo that he has to appear in court Apr. 23, 2018 for his next court hearing.

Sefo did not appear when his case was called that day. The court continued his hearing to May 2, 2018 and again, Sefo was not present.

Kruse then issued a bench warrant for his arrest.

Last Saturday, July 28, 2018 around 8:20 a.m., cops arrested Sefo and another male  following a fight inside the farmers market in Malaeimi. Both men appeared in District Court on Monday for their initial appearances.

Methodist Kuka Mika, a former firefighter, appeared in High Court yesterday morning on allegations that he violated conditions of his probation.

Police arrested Mike last week for disturbing the peace while he was under the influence of alcohol, only a few days after he was released from prison after serving 28 days for contempt of a court order. This is Mika’s second time in court for a contempt of court order hearing.

Mika was first arrested in Dec. 31, 2017 for drugs. In March of this year, he pled guilty to unlawful possession of a controlled substance (methamphetamine). He was sentenced on April 22 to 5 years probation under certain conditions that included being alcohol and drug free.

When the Probation Office conducted random testing on him 4 days after he was released from prison, Mika tested positive for meth. He was arrested and held in custody without bail to await his case.

He apologized for violating conditions of his probation, and promised that he will never make the same mistake again. He told the court that the test for him was too early.

“What have you learned from this experience?” Kruse asked the defendant. Mika replied he would never have good things in life if he continues to do drugs. He said the drug test for him was too early, he didn't expect it.

Kruse smiled and said to the defendant, “I give you one thing, you’re honest to the court. You said you did not expect that probation officers would conduct your drug test so early.”

The CJ said Mika’s action was a clear violation of his probation, which is contempt of court. He then sentenced him to time served, which was 28 days.

Kruse reminded Mika that all conditions of his 5-year probation are still valid, and he must comply with all of them.

Mika is now in custody for another contempt of court order.