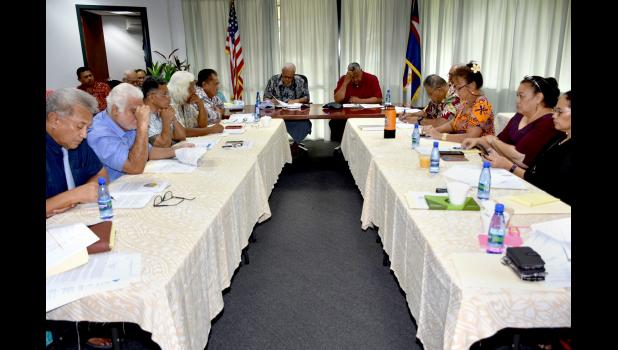 Pago Pago, AMERICAN SAMOA — Lt. Gov. Lemanu Palepoi Sialega Mauga said the planned charter flight to Hawaii for local students heading to college and the military is still in the planning stage and should be firmed up in two-weeks time.

Lemanu gave the latest update on the planned charter at Sunday’s government coronavirus task force meeting as the number of COVID-19 cases in Hawaii surpassed the 1,000 mark by that afternoon.

Lemanu, who led the meeting said that the governor was unable to attend due to pressing matters, and he proceeded to give an update on the planned charter, which at this point is to be operated by Hawaiian Airlines.

He said the task force is still working on the plan for the charter, and he prioritized passengers going to Hawaii — starting with patients for medical checkups and other medical patients; students heading to colleges and universities as well as students recruited into the US military; and those stranded here wanting to return to Hawaii.

Lemanu explained that the flight would not bring down any passengers, and reminded the meeting — and those watching on KVZK-TV — that American Samoa’s borders with Hawaii remain closed.

He said the task force plan will be presented to the governor for approval and he hopes that the plan will be finalized in two-weeks time.

Public Works director, Faleosina Voigt, asked why the charter won’t bring in passengers and Lemanu reminded the meeting that borders with Hawaii remain closed as the governor remains concerned with the increased number of COVID-19 cases in Hawaii.

He also pointed out that a lot of preparation needs to be carried out locally with the medical staff and others to bring in a large number of travelers from Hawaii.

Lemanu noted that medical personnel need a two-week period of rest and down time after the repatriation flights bringing in local residents stranded in Samoa. (See separate story in today’s edition.)

Towards the end of the 30-minute meeting aired Sunday evening on KVZK-TV, Lemanu stressed there are two separate issues, which should be made clear for everyone’s understanding. One is the charter flight, and the other is the closure of borders with Hawaii.

At the June 28th meeting, it was noted that about 150 local residents — which include medical patients, students heading to college and the military — wanted to “exit” to Hawaii as soon as possible.

The governor acknowledged complaints from those stranded in Hawaii and on  the US mainland for keeping the borders closed, but he said the US offers many medical facilities to care for these individuals if they need medical attention compared to one medical center in American Samoa.

As of 12noon, Sunday, July 5, the Hawaii Department of Health reported 25 new cases, bringing the state’s total to 1,023 and a total of 19 deaths, according to the state health website.

And there are still more complaints from those stranded off island as to why there is no charter to bring them home, as Hawaiian Airlines flights between Honolulu and Pago Pago remain suspended until Aug. 1st.