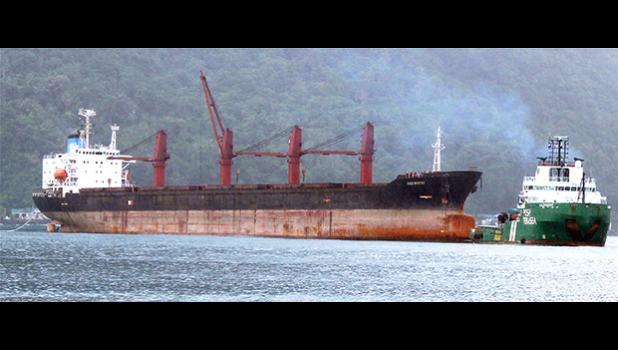 Pago Pago, AMERICAN SAMOA — The federal court in New York City has approved the sale of the North Korean cargo ship Wise Honest, which as of yesterday, remains anchored in Pago Pago harbor.

Court documents, which outlined the agreement for the sale, makes no mention of the current location of the Wise Honest, which was towed to Pago Pago earlier this year in May after it was seized by the US government in April this year in Indonesia.

According to court documents, the agreement was approved by US District Court Judge P. Kevin Castel, and it is between the United States and Cynthia and Frederick Warmbier, who filed a claim last month against the vessel.

The Warmbiers are the parents of Otto Warmbier, a college student from Cincinnati, OH who was sentenced by North Korea to 15 years of hard labor in early 2016 for allegedly stealing a propaganda poster.

The Warmbiers told news media at the time that their son was tortured, and he died days after being returned in a vegetative state to the U.S. in June 2017.

Early this year, the Warmbiers obtained a default judgment of $501.14 million at the federal court in Washington D.C. against North Korea.

The Warmbiers were the only ones who responded, although two North Korean companies - believed to be the owners of Wise Honest - had been informed about the Washington D.C. and the forfeiture action notice.

According to the court’s approved sale agreement, the vessel is under the control of the US Marshal Service (USMS), which administers the US Justice Department’s Asset Forfeiture Program by managing and disposing properties seized and forfeited by federal law enforcement agencies.

The agreement authorized the USMS to sell the vessel in “a commercially feasible manner” and the net proceeds from the sale will be held in a special USMS fund, pending final order of the court.