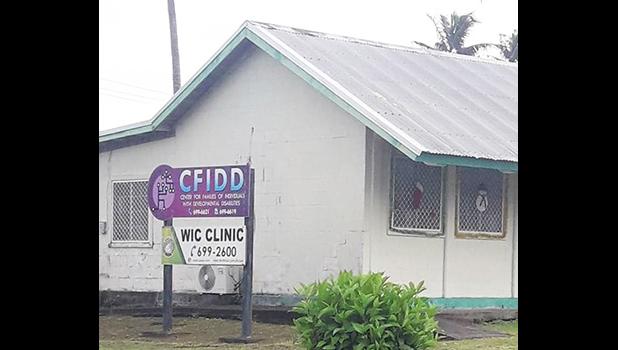 DHSS director reiterates there’s no conflict of interest in heading both entities
By
Ausage Fausia
ausage@samoanews.com

Pago Pago, AMERICAN SAMOA — The Director for the Department of Human & Social Services (DHSS), Muavaefaatasi John Edward Suisala has confirmed to Samoa News that he is the director for the non profit organization called “Center for Families of Individuals with Developmental Disabilities” (CFIDD), which was the subject of a file leaked to Samoa News last month containing allegations that the organization has been inactive for many years but has continued to receive grants from the American Samoa Development Disabilities Planning Council (ASDDPC), a division of the DHSS, to fund several projects and services that were never provided to the community.

Despite his involvement with the CFIDD, Muafaatasi told Samoa News that he does not see any conflict of interest. He said that there are other American Samoa Government (ASG) employees who are also involved in non-profit organizations just as he is.

Now another file containing more documents regarding CFIDD operations was obtained by Samoa News last week. Documents include a general ledger transaction, which shows check numbers and total amounts of funding CFIDD received from two programs under the DHSS; CFIDD Articles of Incorporation, which show that Muavaefaatasi is the Incorporator and by-laws, which detail CFIDD officers’ duties and responsibilities.

The two programs that provided funding for CFIDD are the Prevention Faasamoa Project (PFS) and the American Samoa Development Disabilities Planning Council (ASDDPC).

ASDDPC’s mandate is to provide funding to several private organizations that provide services for families of people with disabilities. Documents show that in September of 2019, a project manager for the CFIDD, who is also a DHSS employee, requested grant funding from ASDDPC to support two projects within the organization, which included increased access for people with development disabilities to transportation and to increase the numbers of child care facilities in American Samoa that welcome children with developmental disabilities.

Furthermore, CFIDD, the documents say, is in a position of readiness to implement these projects by “providing training and technical assistance and dissemination of brochures and information to increase public awareness of the special needs of people with developmental disabilities” and “to provide training and technical assistance to owners and operators of aiga buses and owners and caregivers in daycare providers to increase their awareness and sensitivities to the special need of children and adults with developmental disabilities.”

CFIDD’s proposal was approved and awarded $40,000.00 to continue to provide assistance to families of individuals with developmental disabilities.

Documents received by Samoa News reveal that CFIDD received funding through the two programs from 2013 to 2020.

Muavaefaatasi said since he became DHSS Director in January 2018, CFIDD received four checks from DHSS — two from DDPC and two from the PFS Program.

One of the specific requirements of the funding was to continue support of advocacy services through child care and transportation for individuals and persons with developmental disabilities.

The documents do not report performance — to what agency or to whom these services were provided. However, there have been several daycare providers that have informed Samoa News that they never received service of any kind from CFIDD, including some families of children with developmental disabilities told Samoa News that they never received any services nor funding from CFIDD for their children with special needs.

Samoa News asked Muavaefa’atasi about the possible conflict of interest whereby he is the incorporator of a non-profit organization that receives funding from DHSS, of which he is the director.

Muavaefa’atasi said that he does not see any conflict of interest at all.

“I did not view it as a conflict of interest for DHSS to fund CFIDD during my most recent three-year tenure as the DHSS Director,” Muavaefa’atasi told Samoa News.

He told Samoa News that he’s not the only ASG employee involved in such practices — i.e. working for the government but at the same time involved in a non-profit organizations’ activities.

“Like other employees in ASG and the private sector who are involved in non-profit organizations, we do this because we believe in a cause and we consider it a labor of love,” the CFIDD director said.

He added that, “Most of us do not get paid a salary but mostly volunteer our time for the good of others. As you know, most non-profit organizations are headed and driven by people who hold full time jobs elsewhere for a living and mostly volunteer their time and service because of their passion, commitment and dedication to the public good.”

According to the CFIDD director, they established CFIDD in 2001 not as a business or a way to make money but as a non-profit entity to help parents and families who face the same challenges we faced and to make a difference in the lives of children and individuals with special needs.

“For all these years since the inception of CFIDD, I never considered CFIDD as a business nor as my business (unlike my health food store) but I always see CFIDD as part of our local system that provides public service for our people. It is the same way that I never view my work in ASG as a 7:30 am to 4 p.m job,” Muavaefaatasi said.

He further stated that he has always seen himself as a public servant and a part of a bigger system of public service for the community.

“It may be difficult for some people to understand this kind of mindset but this is why I did not view it as a conflict of interest for DHSS to fund CFIDD during my most recent three-year tenure as the DHSS Director,” Muavaefaatasi told Samoa News.

Read more later this week on the CFIDD issues including statements from daycare providers and families of children with special needs.

In an exclusive interview with Samoa News last month after the first file containing documents about CFIDD circulated in the House of Representative, Nellie Faumuina, who is also the Head of the Women, Infants and Children program (WIC), a division of the DHSS, spoke about her passion to offer her services specifically for families of individuals with developmental disabilities.

Faumuina told Samoa News she’s not getting any pay for her service as the head of the CFIDD. She did say at one time she received about $300 from the CFIDD for her services.

The leaked documents however, show that in 2017 when CFIDD allegedly received $40,000, $9,600 was for the CFIDD Director, which is Faumuina.

Faumuina also told Samoa News during the interview that CFIDD no longer has a business office where the community can access assistance. Instead CFIDD is headquartered at Faumuina’s house in Pago Pago and families of individuals with developmental disabilities can go there for more information.

On the following day, a family member of Faumuina contacted Samoa News to complain that their family name was mentioned in the CFIDD story. According to the family member, Nellie Faumuina does not own a house in Pago nor does CFIDD have an office at their residence.

On the same day, Faumuina called Samoa News claiming she made no such statement — that CFIDD worked out of her house in Pago.