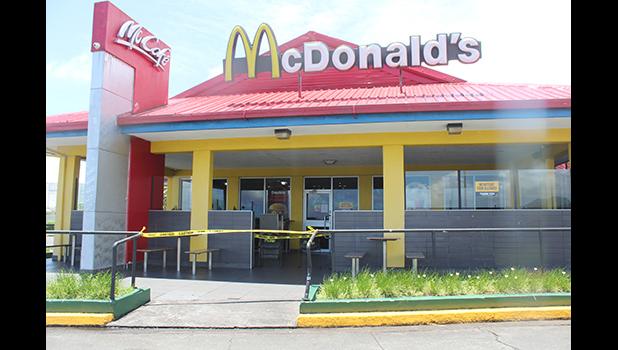 Pago Pago, AMERICAN SAMOA — This Samoa News photo take around 11:30a.m. Saturday, shows yellow-tape, blocking off entrance to the front door to the Dine-In area at the McDonald’s restaurant in Tafuna, which by later in the afternoon was re-opened.

During Saturday’s cabinet meeting, Gov. Lolo Matalasi Moliga told his cabinet members, especially to the Police Commissioner, for police patrolling the community, during the measles outbreak declaration not to close restaurants. He said attention should focus on groups of people congregation together in public for more than 10 minutes.

A few hours after Health Department declared the measles epidemic last Friday afternoon, McDonald’s American Samoa released a statement on social media, “Due to Government orders on recent Measles Outbreak in our territory, we are ONLY OPEN AT DRIVE THRU. Dine-in will be closed until further notice but Drive Thru is still operating at normal hours.”

Carl’s Jr restaurant issued a similar statement on its social media page, “Carl's Junior has been told to close due to the measles out break. Our drive thru is open as usual. Sorry for any inconvenience.”

By Saturday afternoon, both fast-food restaurants issued new statements on social media, saying they have reopened.

McDonald’s said, “Public Health has cleared for us to open our Dine In. Our restaurant’s Dine in & Drive Thru service is back on.”

Carl’s Jr said, “Public Health has advised we can open our dine in restaurant again.”