Meal with a Mentor: Building a stronger support system for our youth 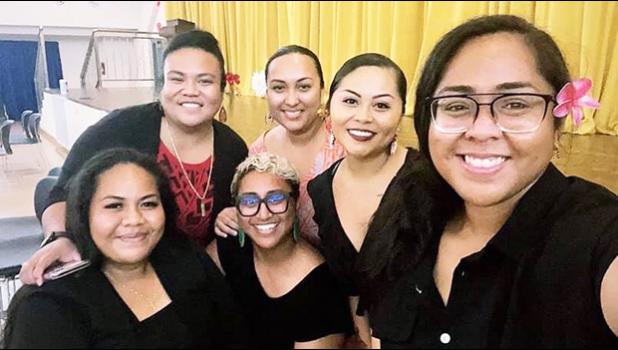 A catalyst for community to take a more active role in guiding the youth
By
by Sabrina Suluai-Mahuka, Finafinau advisor

Pago Pago, AMERICAN SAMOA — Last week Friday, April 9th, local environmental group Finafinau hosted an event entitled Meal with a Mentor at the Lee Auditorium. Generally, Meal with a Mentor is meant to be a catalyst for the community to take a more active role in guiding the youth. The goal is to build a stronger support system so that our youth can be emboldened, empowered and encouraged to excel in their current and future goals.

As such, the purpose of this initiative was to create a space where the youth could connect with an adult from the community. It was a space for the youth to share their thoughts, their frustrations, or even their aspirations. To sign up, the students were given a link to fill in their assent and parental consent, as well as their personal interests, hobbies, and future college and career goals. For the mentors, a link was posted through social media where individuals from the community would agree to be a mentor for the night, cover the meal for themselves and their assigned mentees, and review the prepared slides for the expectations for the event. The mentors also filled in their educational expertise, career choices, and their interests. Essentially, the mentors were encouraged to “Be That Person” for the youth. With this, Finafinau worked to match each mentor and mentee accordingly so that their interests were compatible.

The event had 73 pairs of mentees and mentors sign up. The mentees consisted of students from high schools across the island, as Finafinau reached out to educators from the different schools to ask for participants. Hence, the students were mostly 12th graders who wanted college and career guidance, but there were also a good number of underclassmen as well. The mentors were from various departments and divisions from diverse educational and career backgrounds. There were teachers, business owners, engineers and so much more, who were willing to dedicate their time and effort to be mentors. This two-hour event allowed the mentees and mentors to bond over a good meal, as it is well known that food is a good way to connect people.

Pictured here are the 73 pairs of mentees and mentors for the 2nd Meal with a Mentor at the Gov. H. Rex Lee Auditorium. The event created a space where youth in American Samoa are able connect with an adult from the community. [photo courtesy of Ammon Fepuleai]

From one side of the spectrum, mentee Siona Tusiofo, a senior, shared that he “enjoyed interacting with someone who has experienced life and has gone through difficulties. Hearing about my mentor’s journey showed me that it takes time to persevere through adversity. It was also a cool way to connect with someone over good food.”

On the other hand, mentor Maria Magalasin shared that “Meal with a Mentor (MwM) was such an incredible experience. It is a great platform to positively influence, support, and empower our youth through open and transparent discussions about their interests, skills, hobbies, and even personal challenges. As a mentor at MwM, I was able to gain a new perspective and understand the needs of others, develop leadership skills, and build an authentic relationship. I hope I was able to leave a lasting impact on my mentee and that she had an amazing time like I did. Thank you to the MwM team for such a well-organized event!”

Fortunately, the event was fueled by community support and various donations. With the partnership of the Department of Commerce, the event was held at a bigger venue, the Lee Auditorium, to accommodate the high volume of participants whilst still keeping the setting intimate for personal mentee and mentor conversations. The big hit desserts were donated from Cheat Day and Koko Samoa Bliss, and an event banner was donated from All Star Signs.

Donations from 93KHJ were also given out to mentees and mentors as a participatory token. In addition, Ammon Fepuleai also donated her time and photography skills for media coverage of the event. There were also various monetary donations from individuals locally and abroad, as they were not able to make the event, but still wanted to express their support for this initiative. Hence, the support of the community made a gargantuan difference in executing the event. Finafinau hopes to keep up this momentum to host more MwM’s in the future and keep the community involved as a support system for the youth.

Meal with a Mentor was first initiated in October 2020 as a response to the epidemic of suicides that was ravaging the island. The first MwM was hosted in Samoana’s cafeteria with 50 Samoana students and mentors. The original goal was to pilot within the school and then branch out to other educators. However, with the partnerships and support from the community, the event was able to be exponentially expanded immediately.

The event was executed by the Finafinau team: Elizabeth Fano, Denis Sene Jr., Siumukuka Faaiuaso, Sabrina Suluai-Mahuka and Kacey Iloilo. The team plans to host more Meal with a Mentor events twice a year so that the youth can continuously have a platform to build their professional and personal network and also connect with a supportive mentor.

Finafinau strives to provide an avenue for our youth —ages 13 to 20 — to find their voice and become leaders within their communities.