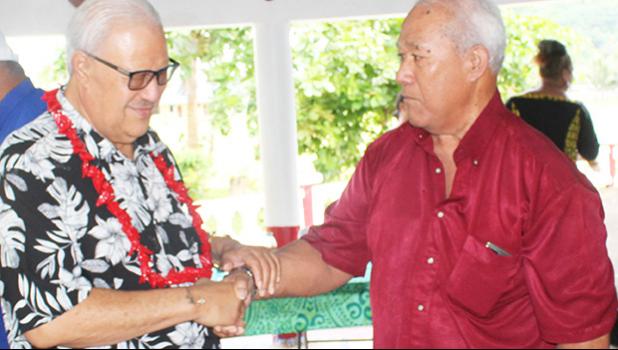 Pago Pago, AMERICAN SAMOA — Maoputasi County traditional leaders re-affirmed, during a county meeting last week Wednesday, the selection of Chief Uti Petelo as the new Senator for Aua, Leloaloa/Atuu, for the next 4 years.

The meeting, led by Paramount Chief Mauga T. Asuega, was called to announce the remaining two of three seats for Maoputasi county in the Senate, after the Pago Pago Village council, which holds the third seat, re-selected Sen. Tuaolo Vaivao Manaia Fruean to take the seat for the next four years during a meeting two Saturdays ago.

When the meeting was called, High Taking Chief (HTC) Taisalialii of Fagatogo informed the Maoutasi country that the three villages including Fagatogo, Utulei and Faga’alu had not yet decided who will be their next senator. He further stated that they will reach a decision in two weeks time. High Chief Fano Mitch Shimasaki is the current holder of the senate seat.

Tuaolo advised Taisalialii that they need to hurry up with their decision, as he had  heard that there are other chiefs of the Maoputasi county who are stuck off island that want to take up the senatorial seat.

“That shouldn’t happen,” Tuaolo advised Taisaliali’i. “We should not delay our decision because of those who are stuck off island. Our time is running out and we need to select our leaders before the new Administration comes into office.”

Traditional leaders of Aua, Leloaloa/ Atuu informed the meeting that they had reached a decision for their new senator.

When asked by Tuaolo about their decision, Rep. Faimealelei Anthony Fu’e Allen told the meeting that after a brief discussion between Sen. Tilo Vagasa Tilo who is currently holding the seat and traditional leaders of the village, Sen. Tilo agreed that its now Leloaloa/ Atuu’s turn.

Faumuina Taufete’e of Leloaloa echoed Rep. Faimealelei’s statement and said that after a discussion among chiefs of their village, they unanimously agreed and appointed Uti to be their next senator.

When given the chance to address the meeting, Mauga congratulated Uti as the new senator for Aua, Leloaloa/Atuu, saying, “A person who takes up the senator role must have a big heart to fight for better things for our county and our people.”

He added that all Maoputasi county senators and representatives in the Fono need to work together as one team for the betterment of the county.

“We now have a seawall for Leloaloa and Aua and we need you to find more funding to build more seawalls for other villages in the Maoputasi county,” Mauga said.

The paramount chief also acknowledged that the decision was made by the traditional leaders of Aua and Leloaloa/ Atuu. He said that there were issues in the past for these villages when they failed to reach a consensus. As a result, the seat was selected by a ‘draw’ (se’i).

“I commend you for not repeating that untraditional way. Your decision today (last Wednesday) tells me and traditional leaders of the Maoputasi county that we can make good decisions for the betterment of our county and our people,” Mauga said.

Mauga told Uti to work together with Tuaolo in the Fono and find ways to develop the county and show love for the people.

“The elections are over and we should return back to our family, our villages and our county to iron things out and stand together as one. We’re leaders and we must lead by example. Let the election results be behind us and let us focus on the future of our government and our children.”

Mauga said that there are a lot of good things that need to be done when the new Administration comes into office.

“…Despite our differences during the elections, we shouldn’t carry those differences forward because it will ruin our future. Let’s move forward and let God lead our country through our new leader.”

He then officially announced that he’s returning to the post of Secretary of Samoan Affairs.

Mauga said that there is a need for another Constitutional Convention to discuss many issues pertaining to the future of American Samoa and its people such as our citizenship; the prohibited fishing zones around the Pacific, including American Samoa; and, many other issues that need to be addressed.

Several traditional leaders from the Maoputasi county supported Mauga’s comment regarding the need for another Constitutional Convention.

One traditional leader told Samoa News that one of the long standing controversial issues in the community is whether or not to elect senators by popular vote, similar to the House of Representatives.

Currently, senators are selected through a Samoan cultural practice of selection — in this case — by county councils, whose members are chiefly titleholders from villages within the county; and over the years, there have been suggestions as to whether or not it’s time to elect senators by popular vote instead. Such a change would require an amendment to the Constitution, in which electors would have to decide via a referendum.

“It’s a constitutional issue” and “it’s an issue obviously the people will have to decide. Times have changed. I know things are bit different now, [than] about 10 or 20 years ago,” one traditional leader told Samoa News.

Another traditional leader echoed his fellow leader’s statement and said, “I agree 100 percent. It’s fair and square. That’s the democratic way.” He said in villages they select their senator, bringing back to the Senate the same person, but “what about the other chief — a lesser ranking chief doesn’t get a chance.”

“So by electing [a] senator, it’s “fair and square. That is the democratic way. And that’s why the people say; our government is unincorporated here and unorganized because of this entire problem. So I agree to vote senators by popular vote.”

One traditional leader pointed out that this is not a new issue and noted, “Our forefathers looked at our rights, our property — land and sea — and our culture and customs. Thanks to our forefathers for the foresight that we are now living in this world.”

“I would say the selection of senators is the purest form of democracy,” he said. “And here’s why: In order for us to select our matai, all the families — it doesn't matter where you live (including off-island) — they all come to select the matai of the family. They select that one person to represent them in family matters, in the village, in the county, in churches and government. Everybody puts their trust in that one person.”

“To me the selection of a senator is the purest form [of democracy]. It’s done in front of family, where they do discussions and debates on the selection process. That’s the form of democracy that I think that is a lot more open than what we have now in selecting any other officials in our government,” one traditional leader said.

Another traditional leader echoed Mauga’s comment regarding the problem we’re facing right now about prohibited fishing zone around the Pacific. According to this traditional leader, changing the zone from 50 nautical miles to 12 was not right because it affects the lives of our people.

He claims the U.S rule change ignores the relevance of the local fishery to the Samoan culture and the Deed of Cession between island chiefs and the U.S government.

“Making changes to our Constitution will allow our own leaders to do what is good for us instead of coming from the U.S,” the traditional leader said.

Sen. Tilo Vagasa Tilo was selected through a se’i in 2016 to fill the seat, when consensus could not be reached and Paramount Chief Mauga made the unprecedented call to select the new senator by a draw. It is believed that is the first time a senatorial seat was decided in such a manner.

At the time, Uti Petelo of Leloaloa, who was serving in the seat, with the backing of chiefs from his village, took the position that Leloaloa should have a full senatorial term because he was serving out the remainder of the term of Faumuina Tagisialii, who had passed away while serving as a senator.

High Chief Tilo Vasaga and the chiefs of Aua however had insisted that it was Aua’s turn to occupy the Senate seat.