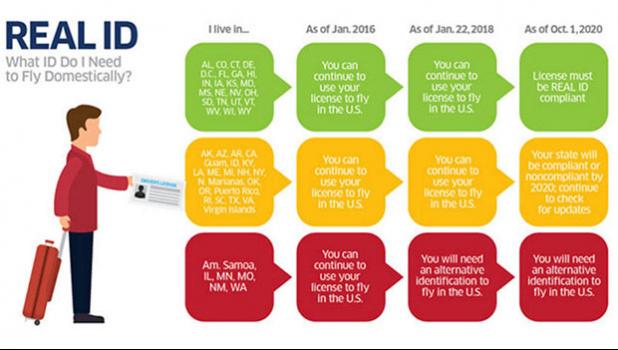 Pago Pago, AMERICAN SAMOA — To fully comply with the federal REAL ID Act, the Lolo Administration is proposing major changes to current law for issuing driver’s licenses, and a new provision is being proposed that would allow a “driving privilege card” to be issued.

Enacted in 2005, the REAL ID Act establishes a national set of standards for state driver’s licenses and identification cards that are accepted by the federal government for official purposes.

However, American Samoa has been unable to meet those stringent standards, prompting the US Department of Homeland Security to issue a Jan. 19, 2018 national statement that effective Feb. 5 this year, residents of American Samoa will no longer be able to use territory-issued driver’s licenses and identification cards to fly domestically or enter federal buildings and military installations.

This prompted a Senate committee hearing in early February, where it was noted that the Lolo Administration was working on addressing compliance, including submission of proposed legislation to the Fono for approval.

The legislation — the American Samoa REAL ID Act — was finally introduced in the Fono this week, and it outlines a wide range of changes to current law including that the Department of Public Safety/ Office of Motor Vehicle will take over the issuance of Identification Cards, which are currently issued by the Office of Vital Statistics, a bureau of the local Homeland Security Department.

Gov. Lolo Matalasi Moliga informed Fono leaders that the legislation would help bring American Samoa into compliance with the federal REAL ID Act, “which will enable American Samoans to use their driver’s licenses and identification cards” to pass through US Transportation Security Administration security and to access other federal facilities.

According to the governor, passing this bill “will help our efforts to be fully compliant by December this year.” He also says that it’s “urgent” that American Samoa becomes REAL ID compliant “as soon as possible as federal agencies will not accept non-REAL ID identification, making it difficult for our residents to travel and access federal buildings.”

The 23-page bill outlines specific requirements — such as required documents — for obtaining a driver’s license and ID Card. Additionally, the driver’s license would be valid for 5 years compared to the current 3 years.

The legislation also allows the issuance of a “limited term driver’s license” that is valid only during the period the applicant is allowed to stay in the United States — including American Samoa — or will expire 5 years from the date of issuance.

Additionally, the proposed law allows the issuance of a “driving privilege card” — valid for 5 years — which is issued to an individual who meets driver’s license requirements but is unable to provide evidence of lawful presence in the US — including American Samoa.  Proof of documentary evidence for driver’s licenses and driving privilege cards — outlines a long list of documents, including proof of US citizenship or national status.

For the driving privilege card, the bill states that it’s to be distinguished from the driver’s license by a “unique design, color or other means,” and clearly displays on the front of the card a phase substantially similar to “For driving purposes only — Not valid for identification.”

The bill also outlines specific details of what’s needed as proof for an ID card. An individual who meets requirements for an ID card but is unable to provide evidence of lawful presence in the US as required by local law, would be issued an ID card that clearly displays on the front of the card a phrase substantially similar to “This card is not REAL ID compliant.”

Removed from current law, according to the bill, is the “provisional driver’s license.”

The bill also proposes a fee of $40 for the driver’s license (which is currently $12, and the license is valid for three years), driving privilege cards; limited term licenses and ID cards. The fee is the same for renewals.

Other license fees remain the same, such as the 6-month learner’s permit of $5; visitor driver’s permit $9 and commercial driver’s license $8.

According to the bill, 75% of each fee paid would be placed in a revenue fund of DPS for law enforcement costs, maintenance and supplies for production of driver licenses.

According to the legislation, all driver’s licenses issued prior to implementing this Act, which is effective Jan. 1, 2019, would remain valid until the expiration date on the license or until one-year after the implementation of this Act.

During this period, all licenses issued prior to the implementation of this Act, “shall be treated as driving privilege cards,” according to the bill, which would repeal another provision of the law that gives the Office of Vital Statistics the authority to issue American Samoa ID cards.

A Fono hearing on this and other new bills is on hold at this time while lawmakers complete the FY 2019 budget review by the end of this week or early next week.

Samoa News will report later this week on other major changes being proposed in the bill, dealing with driving under the influence and other related driving offenses.