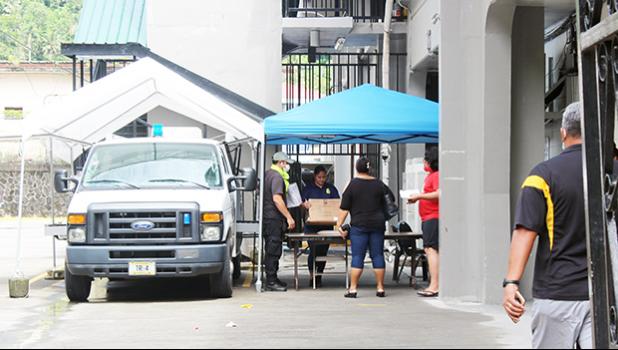 Only businesses assessed a fee of $10 per package
By
Fili Sagapolutele
fili@samoanews.com

“The parcel scanning fee — $10 a parcel as prescribed by law — is assessed only to businesses, [while] personal items may be scanned as part of the inspection process but are not assessed a scanning fee,” Deputy Treasurer of Revenue, Keith Gebauer said yesterday responding to Samoa News questions.

Samoa News observed late yesterday morning the mobile scanner van outside the Customs receiving area of the Post Office in the back of the Lumana’i Building, owned by the Development Bank of American Samoa (DBAS). Two Customs agents were scanning packages for three local residents — one of whom told Samoa News that she didn’t pay anything for scanning her personal package and the process was fast.

Asked when Customs scanning operations at the Post Office started, Gebauer said it began two weeks ago with the approval of the US Postmaster and DBAS management as part of the Customs Divisions efforts to minimize contact between Post Office customers “and our personnel as recommended” in the Governor’s COVID-19 emergency declaration.

“Our priority is to keep our personnel and Post Office customers safe as we conduct our inspections during these difficult times,” he said, adding that scanning operation is scheduled for the highest volume days as indicated by the Postmaster — Saturdays and Mondays.

“And may change as needed and with the authorization by the Postmaster and DBAS management. We are very grateful to the both of them for allowing us to operate our scanning operation,” Gebauer said.

He explained that Customs hadn't been permitted to scan when the Customs scanning operation first launched in 2016  due to limited space in the receiving area of the Post Office.

Additionally, the scanning operation and fee schedule had been in effect since the passage of the scanning legislation in 2016.

“Customs only assesses the scanning fees when the service had been utilized during the inspection process,” he said.

Asked if a public notice was issued in advance of this Post Office operation, Gebauer said, there was no formal announcement, as the overall scanning operation had been in operation since 2016. However, “Customs did not assess any fees the first weekend — Saturday and Monday — to allow time for businesses and the community to be aware of our operation,” he said, and that Customs began assessing the scanning fee of $10 a parcel — as prescribed by law this past Saturday, Apr. 4th.

“As the van scanning operation had been in use at the Pago Pago International Airport from the very beginning, we follow the same scanning protocols at the Post Office,” he said.