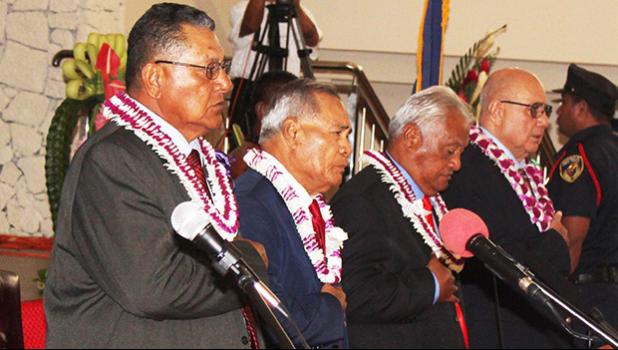 Pago Pago, AMERICAN SAMOA — “Preliminary operating figures” at the close of FY 2019 - which ended Sept. 30, 2019 - is estimated to have an “operating surplus” of more than $700K, increasing ASG’s funding balance for that fiscal year.

This is according to Gov. Lolo Matalasi Moliga’s State of the Territory Address yesterday during a Fono joint session, opening the Third Regular Session of the 36th Legislature at the Fale Laumei.

While the official address was outlined in a booklet, Lolo gave a summary of ASG finances during his address - delivered in Samoan. He said the governor is required by law to provide a financial outlook of the government and he was providing a summary of the past 7 years.

According to him, when the current administration took office Jan. 3, 2013 ASG faced “$44.5 million of debt exposure” and an estimated FY 2013 year-end deficit of just over $5.17 million.

This “immediately compelled” the new administration to issue cost containment measures on Jan. 4th - the day after the inauguration - to “control wasteful spending with concurrent implementation of our vision of financial prudence and fiscal accountability to restore” ASG’s financial integrity.

FY 2014 financial results registered the deficit fund balance to more than $13.15 million, caused by the more than $8.35 million of deficit spending, Lolo said, adding that re-enforcement of cost containment measures was re-affirmed in FY 2015, with positive results.

“Operating year 2017 produced historical results, for it transformed the deficit operating trend of the government to its first recorded positive fund balance of $786,300 dating back  almost two decades ago,” Lolo explained.

The “historical setting trend” continued in FY 2018 with an operating surplus of over $3.08 million resulting in a positive fund balance of more than $3.87 million by the close of FY 2018.

Over the last 4 years, Lolo implemented a new budget proposal process in which spending was based on estimated collected revenues.

Yesterday was Lolo’s 8th State of the Territory Address, his final one as chief executive.

He said it’s been a long and difficult journey, especially at the beginning of his administration when he and Lt. Gov. Lemanu Peleti Mauga were presented a  huge deficit - in millions - at the close of FY 2012 which carried over to FY 2013.

“All that we have accomplished is through our working together with the help of God,” Lolo told lawmakers. He expressed appreciation to the Fono for continued support over the past 7 years.

He acknowledged his cabinet directors for their contribution and hard work that has brought ASG finances into the “black”; the support from Chief Justice Michael Kruse and the Judicial Branch; and the US Department of Interior which has been working closely with the administration over the years.

Samoa News will report later this week on other issues outlined in the governor’s official written address.