Locals urged to look out for Portuguese Man-of-War 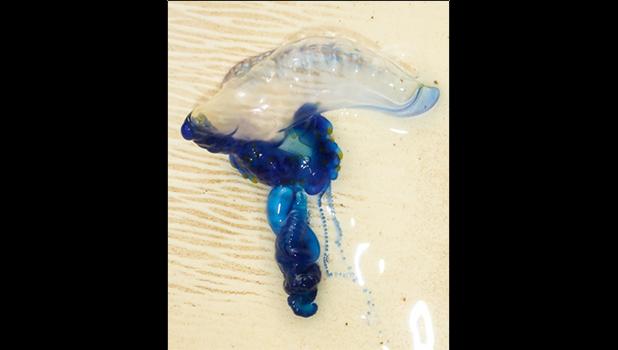 The tentacles contain potent neurotoxin that can cause painful welts
By
Samoa News staff
reporters@samoanews.com

Pago Pago, AMERICAN SAMOA — Reports of people being stung in Utulei, as well as sightings in the Failolo area of the Portuguese Man-of-War have been forwarded to the Department of Marine and Wildlife Resources (DMWR), resulting in a public advisory being issued.

According to DMWR, their office has received recent reports of harmful jellyfish not only in local waters, but also washing up on shore. The most common jellyfish found in American Samoa waters is the hydroid jellyfish; however, a recent sighting of a Portuguese Man-of-War floating with the current, has raised concerns for swimmers and beachgoers.

“It is suspected that they are present in large numbers due to the strong winds which are pushing them closer to shore,” according to DMWR in a statement issued yesterday.

The Portuguese Man-of-War is easily recognizable as it has dark blue tentacles, between 30-100 feet long. The tentacles are attached to a gas bladder which floats on the water’s surface; however, some of the tentacles break free and are difficult to see until the victim feels the painful sting.

The Portuguese Man-of-War is known as the Blue Bottle in other parts of the world, and is not a real jellyfish; instead, it is a hydrozoan which is more closely related to fire coral.

According to National Geographic, “Not only is it not a jellyfish, it's not even an "it," but a "they." The Portuguese man-of-war is a siphonophore, an animal made up of a colony of organisms working together.”

They are “covered in venom-filled nematocysts used to paralyze and kill fish and other small creatures. For humans, a Man-of-War sting is excruciatingly painful, but rarely deadly. But beware - even dead Man-of-Wars washed up on shore can deliver a sting.”

Refrain from touching the Portuguese Man-of-War even if they wash up on the beaches. The tentacles still contain potent neurotoxin which will cause painful red welts accompanied by swelling and moderate to severe pain which can last 2-3 days.

In very rare cases, a severe allergic reaction may interfere with cardiac and respiratory functions. In such cases, immediate medical treatment should be sought at LBJ Hospital.

3.       Once the tentacles or any remnants have been removed, flush the area with seawater;

4.       Apply heat. Use the hottest water you can tolerate without scalding; and

Contact the Department of Marine and Wildlife Resources at 633-4456 and ask for Maria Vaofanua regrading any questions or to report sightings.