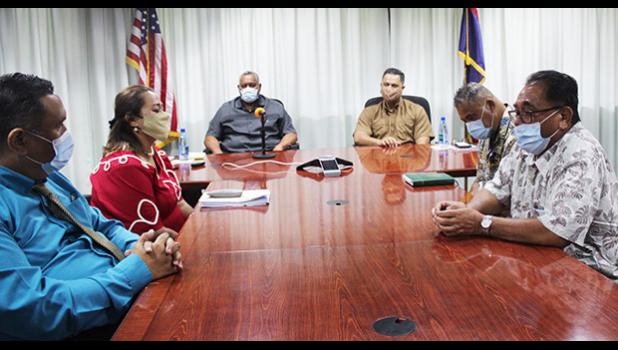 Repats eligible for COVID-19 vaccination will get their shots
By
Fili Sagapolutele
fili@samoanews.com

Pago Pago, AMERICAN SAMOA — Repatriated passengers quarantined at the Tradewinds Hotel, eligible for the COVID-19 vaccine will be vaccinated prior to being released from their required 14-day quarantine period, says Gov. Lemanu Peleti Palepoi Sialega Mauga, during a news conference last Friday morning that he called to provide an update on the first repatriation flight, which arrived Feb. 1st.

Lemanu noted that providing an update for the community was necessary as there remain many residents concerned with the virus entering American Samoa, as the government starts the first of a number of repatriation flights, with dates for following flights not yet to be announced.

He said health officials continue to encourage the public to use face masks and maintain social distancing. He said these requirements may be difficult for the community to adopt but points out that if American Samoa wants to remain free of the virus, it’s important to follow the advice of health experts.

For the repatriated 159 passengers, they remain in quarantine. Lemanu said he has been briefed by the task force that the first COVID-19 test in American Samoa for all passengers came back negative and this is the 4th test for the passengers since the start of this repatriation flight with three tests done in Honolulu.

Lemanu said many have also queried about the people involved in supporting the repatriation effort here, such as drivers of buses which transported passengers to Tradewinds Hotel. He said he has been informed by the task force that these individuals are quarantined at an ASG facility.

(Information received by Samoa News shows that the 159 repatriated passengers included six wheelchair travelers. And the passengers were transported from the airport to the hotel using 12 aiga buses, two vans from the Dial-A-Ride program, and two EMS vehicles.)

Responding to a media question, Motusa said the Abbott ID machine was used for testing of the repatriated passengers, as this machine is the “first layer” of testing and if any of the tests had come back positive, then the GeneXpert machine would be utilized for a “confirm positive” result.

Motusa said this is the same process used for container vessels calling into the Port of Pago Pago where if there is a positive, the GeneExpert is used to “confirm the positive case”. He also said that DoH and LBJ laboratories worked together in testing the passengers.

Despite the fact that all repatriated passengers tested negative, Lemanu said the community should not let their guard down and to continue to abide with preventive measures — wear masks and observe social distancing.

Lemanu thanked the community for their support and patience as the government carries out the repatriation program to bring home stranded residents, to be reunited with their families.

And he expressed the government’s sincere appreciation to all those who were involved such as Hawaii’s governor and lieutenant governor, the Mayor of Honolulu, Interior Department officials Nikolao Pula and Lydia Faleafine-Nomura, those in Hawaii — many of whom were volunteers — ASG employees in Hawaii, and everyone here who played a role in planning and carrying out the first repatriation flight.

The governor also announced that starting last Thursday afternoon, families can drop off “mea alofa” such as gifts, food and other items for their family members in quarantine. The drop off time is from 2p.m. to 5p.m. at the gate and will then be delivered to the rooms. (See background at end of story)

Asked about the next repatriation flight, the governor responded that planning will begin soon, but there is no firm date. He said planning takes into consideration the fact that American Samoa has limited resources — such as quarantine facilities and medical personnel.

He explained that medical personnel and first responders involved must take a break and rest after the first repatriation passengers complete their 14-day quarantine.

Further, the hotel needs to be thoroughly disinfected and that DoH and LBJ need to stock up on supplies in preparation for the next flight, he said adding that the limited number of passengers on the repatriation flight is also due to the limited resources available on island.

The governor said the goal is to return all local residents stranded off island. He said that once the date is firmed up for the next flight, that information will be made public.

Information has been circulating online and in the community of possible early release of some passengers from quarantine before the 14-day quarantine is completed, following the latest negative COVID-19 test. Asked about releasing repatriated passengers early, Motusa said such a decision is left to doctors and the medical staff and if there is a change in the quarantine requirement, it will be presented to the task force and the governor for a final decision.

Motusa explained that even if passengers leave quarantine, DoH’s follow-up work continues, in which DoH “kicks in” its “discharge mission surveillance” team that will follow up on the passengers upon release — especially elders ages 65 and over, who will be “monitored” to ensure there are no health issues later upon release to their homes.

Asked by the media what lessons were learned from the first flight to improve preparation for the next flight, Talauega responded that there were many lessons learned, saying that this is the first time American Samoa has conducted a repatriation flight. And that the task force has recorded all these lessons so that it can do even better going forward.

However, the former attorney general, flatly declined to comment on the specific lessons learned. He did say that the task force is open to suggestions from the community on improvements. Such suggestions can be shared by contacting the Emergency Operations Center (EOC) in Tafuna.

Another media question concerned inter Samoa flights — with the last one before Christmas last year taking back to Apia, Samoa nationals stranded here.

Lemanu pointed out that the public has also raised the issue of inter Samoa flights and it is being reviewed by the task force. He reiterated an earlier response during the news conference that the territory has limited resources.

And if Samoa flights are carried out, that means ASG will need quarantine sites as well as medical personnel, while at the same time, dealing with the larger repatriation from the US.

He said discussions also need to be held with the Prime Minister of Samoa before flights resume on the inter Samoa route.

Samoa News understands that there are some local residents who want to travel to Samoa and then on to New Zealand for medical reasons. And some local residents, need to visit the US Embassy in Samoa to obtain VISAs in order to get on the medical charter flight to the US.

A facebook post alleges that a DPS officer helped himself or herself to ‘food’ dropped off for family members in quarantine before permission was given for items & food to be dropped off at Tradewinds.

In a ‘live’ post shared to Samoa News from a Repat- woman in Quarantine — she say such a police officer is not honest and respectful in doing the job. She also says that the police officer posted what was done — taking the food, saying it was done while ‘waiting for OT’. She does not name the officer.

The Repat says while the food was dropped off when it was not yet permitted, she believes her brother should have been made aware of the problem. She says that she didn’t find out anything about the ‘drop off’ until a family member directed her to the post about a week later.