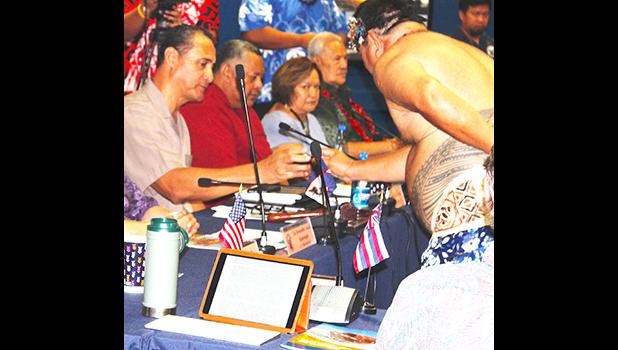 American Samoa’s survivability is at stake
By
Fili Sagapolutele
fili@samoanews.com

Pago Pago, AMERICAN SAMOA — Lt. Gov. Lemanu Palepoi Sialega Mauga has called on the Western Pacific Regional Fishery Management Council, and the US National Oceanic and Atmospheric Administration to “pay close attention to our cries” to come up with “immediate solutions to American Samoa’s survivability.”

Lemanu, speaking on behalf of Gov. Lolo Matalasi Moliga, addressed yesterday’s opening of the 180th Meeting of the Council at the Gov. Tauese P.F. Sunia Ocean Center, where the Council and others were welcomed with a traditional ‘ava ceremony.

Lemanu shared with the Council “a major economic dilemma that American Samoa has,” saying he’s certain the Council is very aware of it. And that is, the governor’s two separate letters to the federal government “to address the need to support our request and efforts in supporting our local cannery.”

“It is very crucial that our government bends over backward to maintain the existence and operations of the cannery for employment, and our economy,” he said, pointing to the critical issue — that NOAA reconsider its decision to close off fishing by the US purse seiner fleet in the US-EEZ and on the high seas — referred to as Effort Limit Area for Purse Seine (ELAPS) — for the rest of calendar year 2019, effective Oct. 9th.

Lemanu reminded the Council that the closure “will affect our fish cannery, and have a major negative economic impact on our tuna-dependent American Samoa.”

He continued, “American Samoa (through the governor) had mentioned that such a decision” to close the ELAPS “was baseless” - based on a report by one fishing entity.

The report was countered by a scientific research report by NOAA’s Pacific Island Regional Office and Southwest Fisheries Center that was received later on “and yet such decision wasn’t overturned, or reconsidered,” he said.

Lemanu pointed out that American Samoa had also requested and recommended alternatives to support its economy. For example, use American Samoa’s Small Island Development (SID) designation to exempt US flagged purse seiner vessels — 50% or more — of their catch from the ELAPS limit but “that again was never considered seriously.”

Because of this limitation, that “kills our economy and businesses that support American Samoa, our cannery now turns to China to purchase tuna,” Lemanu said, adding that this in itself does not make sense. Because, on one hand, “we are trying to push China back, and at the same time, the US is tying our hands” and leaves us no choice, but to reach out to the very same country [China] that we are trying to push back, in order to survive, he said. “Talk about mixed messages, policies, and rules.”

“If the Council and NOAA pay close attention to our cries, and immediate solutions to American Samoa survivability, we would appreciate it very much,” he said.

He then offered “other considerations to think about as we try to find solutions to fishing.” He suggested collaboration at the national level with programs that work, or fishing management and conservation in the open seas. “We need to have meaningful national partnerships with national working engagement groups,” he said.

The other suggestion is “fa’asao” or protection and preservation of certain shoreline areas for fishing, as there are fa’asao projects in some villages in American Samoa. “Fa’asao — has been proven…it works on our shores,” he said. “But like everything else it comes with its cost.”

In closing, Lemanu offered a quote from Herbert Hoover: “Fishing is much more than fish. It is the great occasion when we may return to find simplicity of our forefathers.”

Congresswoman Aumua Amata also spoke at the opening, sharing with the audience her message in Washington D.C., that “we need more certainty including a stable multi-year economic development tax policy [that helps] the remaining cannery; and restoration of our fishing waters for US vessels.”

“We have obstacles in these goals,” she said, adding that it’s not helpful that most in Washington are “very distracted right now, but we must stay focused on where we can do some good for our people, by strengthening all US fishermen.”

Other issues she covered, included federal legislation she introduced in 2016 and later enacted into law, which amends the Western and Central Pacific Fisheries Convention Implementation Act.

The law “basically... mandates that US negotiators put the interest of the United States first,” she said, adding that she is glad to see that the US Coast Guard “will manage our EEZ and high seas fishing days allocations in a manner we believe best for our stakeholders, which is what the other Pacific island nations do for their fishing days.”

(Samoa News notes that US negotiators represent the US government on the international fishery commission, such as the Western and Central Pacific Fisheries Commission that set the ELAPS limit. In the US, NOAA enforces it.)

Aumua told the audience that the US must also be alert to the actions of others in the Pacific. She pointed out that the Chinese longline fleet has increased to more than 500 and now catches 45% of the South Pacific albacore, “while our American Samoa longline fleet has dropped from 60 vessels to 13 active vessels.” She said,“US negotiators and our local government should support the US longline fleet based in American Samoa and Hawaii with their quota and fishing access needs.”

Samoa News will report later on other matters from the opening day of the meeting, which closes tomorrow.