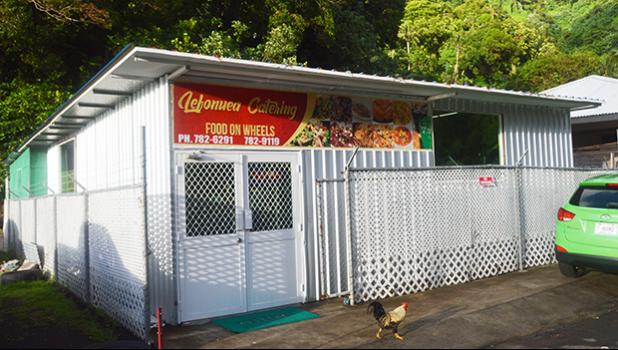 Pago Pago, AMERICAN SAMOA — While Sen. Fonoti Tafa’ifa Aufata claims that the owners of Le Fonuea eatery behind the A.P. Lutali Executive Office Building in Utulei violated local law, one of its owners, Mrs. Eseneiaso Liu dismisses the claim, saying that the business followed all required ASG processes before it opened.

The Tualauta female senator made the public allegations Tuesday when Mrs. Liu, who is director of Human Resources Department, appeared before the Fono Joint Budget Committee for her department’s fiscal year 2021 budget.

Fonoti recalled that she raised the issue of the restaurant located behind the government building at last week’s FY 2021 budget hearing for the Administration Service Department that oversees maintenance of the EOB.

And she asked Mrs. Liu if the ASG Zoning Board was involved in the permitting and if a decision was made by the Zoning board to put a restaurant there.

While this issue is not part of her department’s budget hearing, Mrs. Liu said she will provide a response, which is “yes”, saying that the restaurant went through the required ASG process in order to operate where it is now.

Without providing any evidence or citing any specific law, Fonoti informed Mrs. Liu that “what you have done is violate the law,” Fonoti asked who pays for the electric and water service used by the restaurant.

Mrs. Liu responded that the restaurant pays these expenses. And because the matter is now raised in the committee, Mrs. Liu gave brief background information, saying that a local businesswoman had operated a “lunch wagon” for more than 10 year around EOB area but the woman was instructed to set up an area for customers to sit-down to dine.

While Mrs. Liu didn’t say who instructed the woman to set up a sit-down dining area, she noted that there was a rat-problem with the (EOB) building and thereafter she purchased the lunch wagon and turned it into the current operation with a sitting/ dining area for customers.

“This is government property”, said Fonoti fired-back, before Joint Budget Committee co-chair Sen. Magalei Logovi’i intervened saying that Mrs. Liu is before the committee for budget review and that any other issue not related to the budget process can be taken up at the appropriate time.

Mrs. Liu quickly added that she went through the required process and it was not clear as to what law her restaurant has violated. The restaurant also caters food and drinks.

As previously reported by Samoa News, the fast-food restaurant owned by Mrs. Liu and her husband Siakisone, opened in January last year, to the surprise of many — with complaints voiced in general from some local business owners.

Many pointed to a conflict of interest (or undue influence) in acquiring the government property lease. The lack of bathrooms in the eatery was also noted by critics. However, DoH told Samoa News at the time that permission had been given for EOB bathrooms to be used.