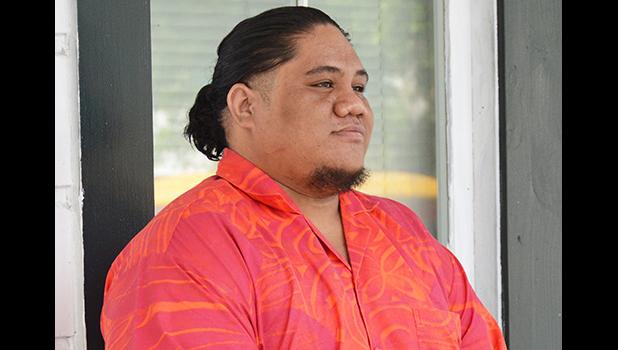 This is despite arguments from the two prosecutors that the evidence they presented proved their case beyond a reasonable doubt.

The jurors were not convinced though, siding with the defense that Alo did not give the glass pipe containing meth to a Tafuna HS student, and that some of the government's witnesses lied on the stand.

A smile of relief was seen on Alo’s face when the verdict was read. He turned and shook hands with his defense team: Assistant Public Defender, Rob McNeill and defense lead investigator, Paepaetele Suisala Jr.

Alo's mother cried tears of joy, and family members who sat behind him in court were elated.

After spending more than 14 months at the Territorial Correctional Facility (TCF) to await trial, Alo is now a free man.

Prosecutor Laura Garvey praised the hard work of government witnesses; but defense attorney Rob McNeill questioned their credibility, claiming some of them lied to the jury.

In her closing arguments, Garvey reminded jurors what the defense counsel had stated during his opening arguments; that the main issue in this case is, who gave C.K. the glass pipe containing meth.

Garvey said the defense did not dispute that the incident happened on Oct. 6, 2017, when a security guard at Tafuna HS discovered a glass pipe containing meth inside C.K.’s backpack. And according to C.K.’s statement to police, it was Alo who gave it to him.

Garvey told jurors that not only did C.K. testify that Alo gave him the glass pipe, police officers also testified that Alo admitted to doing so.

“There is no other issue regarding this case, rather than — the defendant gave C.K a glass pipe containing methamphetamine,” Garvey said, telling jurors not to "distract" themselves with other things the defense is trying to introduce.

“This case is very simple; it's about Alo who gave C.K a glass pipe containing methamphetamine.”

Garvey then asked the jury to find Alo guilty of the charge against him.

When it was his turn, McNeill told the jury that when he first reviewed Alo's file, he questioned why a person would want to go to trial when the government claims there is an eyewitness, and the accused has already admitted to police that he gave meth to C.K.

McNeill went down the list of government witnesses and singled out the fourth one, the THS security guard. He said this particular testimony will provide a glimpse of C.K.'s character.

McNeill said that according to the security guard’s testimony, she was patrolling the campus when she saw C.K. and his friend sitting under a tree. She instructed the two boys  to move away from the area but when she came back around, the two were still under the tree, so she told them — again — to move away and they still did not listen.

The security guard came back a third, fourth, and fifth time, and still — the boys did not move from under the tree.

McNeill said the security guard's testimony reveals that C.K. is disrespectful, and he is a drug dealer who told jurors that he sold drugs to his friend at school.

"He was locked up for selling drugs and later released,” McNeill said, adding that C.K. is from Laulii but attends Tafuna HS. "Why is that?" the defense attorney asked. "C.K. does everything to get away from trouble. He’s a troublemaker.”

One of the issues McNeill addressed, was why the government did not call  Det. Ioane Paselio to testify. According to McNeill, Paselio was the one who interviewed Alo and claimed that Alo admitted to him that he gave the glass pipe to C.K.

The attorney went on to question the credibility of the government’s last witness, Det. John Seumanutafa. McNeill said he doesn't believe what Seumanutafa said on the witness stand.

“When I asked him questions, he tried to answer in another way. He first said that he was the one who escorted Alo to the police station to be interviewed, but later he changed his story. He also stated that he was inside the room when Alo signed his admission to the allegation; however, he later changed his story. He also said that Alo was warned of his constitutional rights before he was interviewed, but according to the file, Alo was warned of his rights two days after he was interviewed by police,” McNeill told jurors.

McNeill said the government failed to prove their case — from beginning to end.

“The government did not present to you a single piece of physical evidence to prove their case. They only presented to you words and wanted you to believe that what they said was true."

In redirect, prosecutor Garvey reminded jurors that the case is not about C.K. or J.M., it' about Alo.

With regards to Det. Paselio, Garvey said the reason why the government did not call him to the stand, is because Paselio has nothing to do with this case.

“Alo did not give the glass pipe to Det. Paselio, he gave it to C.K.,” Garvey said.

Regarding Det. Seumanutafa’s testimony, Garvey said Seumanutafa did not gain anything from lying on the witness stand.