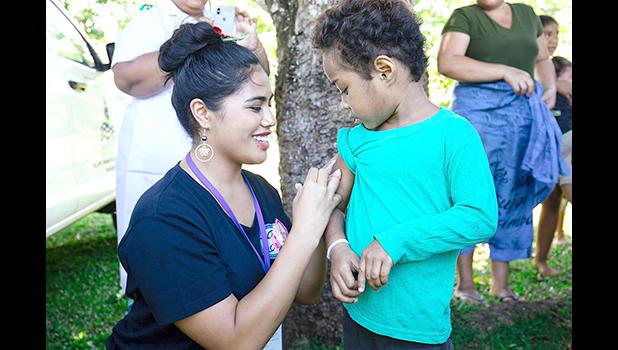 Measles-related death toll climbs to 63 in Samoa as help continues to pour in
By
Samoa News staff
reporters@samoanews.com

Pago Pago, AMERICAN SAMOA — Effective immediately, children 0-4 years old and pregnant women traveling from countries affected by the measles outbreak will NOT be allowed to enter American Samoa. This is according to an updated announcement signed this week, December 4th, by Public Health director Motusa Tuileama Nua.

As the territory moves forward with efforts to protect our borders from a measles epidemic, Public Health continues to provide updates on travel requirements for people passing through the airport and the inter island dock.

And while MMR shots were being provided at the Pago Pago International Airport over the past few weeks, Public Health says the practice will no longer be carried out.

(Samoa News notes that over the past month, travelers departing the territory were required to provide proof of immunization before they were allowed to enter the airport waiting area for outbound flights. MMR shots were provided by DOH personnel at the entrance to the immigration desk. But as of Wednesday, Dec. 4th, DOH says no more MMR shots will be offered at the airport).

Residents and non-residents “will be DENIED entry if MMR vaccine was received less than 14 days before returning. Children 0-4 years old and pregnant women will NOT be allowed to travel to measles infected areas,” says DOH.

As for health clearance for travel permits for non-residents, DOH says “only 1 non-resident per sponsor is authorized, in efforts to prevent the spread of measles.” All schools and daycare facilities are reminded not to accept any child without an immunization record showing their MMR is up to date.

As of yesterday morning, December 6, 2019 (Samoa Time), the Ministry of Health confirmed that a total of 4,357 measles cases have been reported to the Disease Surveillance Team, since the outbreak started, with 140 recorded in the last 24 hours.

There are currently 178 measles cases who are in-patients at all health facilities. Admissions include 20 critically ill children in ICU/HDU and 3 pregnant women at TTMH. The total number of measles cases admitted to all hospitals recorded for the outbreak to date is 1,369. Of that, 1,128 (82%) patients have been discharged. Recovery rate remains the same since the last update. To date, 63 measles related deaths have been recorded, with 1 fatality in the last 24 hours.

In Samoa, the country was shut down - except for essential services - for two days (Thursday 12/5 and Friday 12/6) for the “door-to-door mass vaccination campaign”. The lockdown meant vehicles were not to be on the road between 7 a,m, and 5p.m. and people who have yet to get vaccinated were to hang a red flag or cloth outside their homes so health workers will know which homes had residents in need of immunization shots.

Newly crowned Miss Pacific Islands, who is also the reigning Miss Samoa, Fonoifafo Seumanu, has joined the effort. A nurse by profession, the ‘Selena of Samoa’ took to the streets to administer measles shots for residents there.

Hawaii’s Lt. Governor Josh Green - who is also an Emergency Room physician - led a team of 70 healthcare professionals  - 55 nurses and 15 physicians - from the Aloha State who landed in Samoa earlier this week to help with the mobile immunization campaign. According to the Samoa government, the State of Hawaii’s humanitarian aid to Samoa is valued at over $2 million USD.

The Government of Japan has dispatched an Infectious Diseases Response Team of the Japan Disaster Relief (JDR) composed of doctors, nurses, officials of the Ministry of Foreign Affairs, and Japan International Cooperation Agency (JICA) to Samoa as well. The first team arrived on Dec. 4th

New Zealand has been at the forefront, bringing in much needed supplies and medical help to Samoa. A week ago, a Royal New Zealand Air Force C-130 Hercules aircraft delivered an oxygen generator, oxygen compressors, condensers, and bottles to the independent state. The aircraft and crew then flew to Nadi, Fiji to pick up 50,000 measles and rubella vaccines provided by UNICEF for the Samoan Government’s vaccination program.

Thereafter, a RNZAF Boeing 757 transported 2784 kilograms of medical stores, including hand sanitizer, chilly bins for vaccine transportation, vaccine fridges, power supplies for the fridges, and 150 cartons of medical supplies, according to medium.com