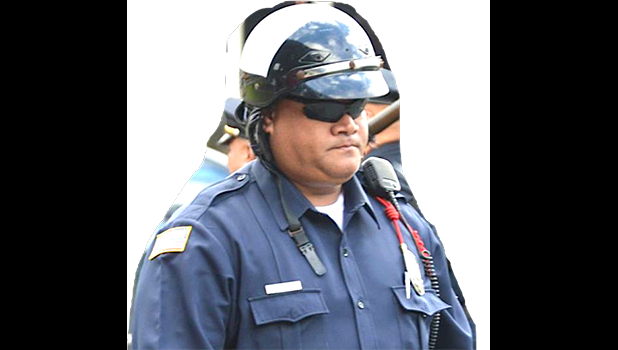 By
Ausage Fausia
ausage@samoanews.com
Gov’t claims he ‘covered up’ the escape of inmate allegedly involved in Leone shooting

Pago Pago, AMERICAN SAMOA — Jury instructions and opening statements for the jury trial of a former Police Watch Commander at the Territorial Correctional Facility (TCF) charged in connection with the shooting that occurred in Leone last year involving an inmate who allegedly escaped from confinement during the commander’s watch, began yesterday in High Court.

Lomu, who is released on a $5,000 surety bond, is represented by Assistant Public Defender Ryan Anderson, while prosecuting the case is Assistant Attorney General Doug Lowe, assisted by lead investigator, a former DPS police detective, who is currently working as a Special Agent for the Attorney General’s Office, John Seumanutafa.

A six-member jury — five females and one male was selected this past Monday.

Lowe told jurors that Lomu was the person who covered up a crime committed by inmate Manu Lefatia, when Lefatia escaped from TCF on the morning of Aug. 12, 2018, went to Leone and allegedly shot a man inside his house; but defense attorney Anderson told the jury that the government failed to complete their investigation and his client did not try to cover-up Lefatia’s escape.

Lowe told jurors that sometimes, the cover up a crime can be worse than the crime; and the consequences for a person who covers up a crime is very bad.

He explained that on the early morning of Aug. 12, 2018, Lomu, who was the Watch Commander for the morning shift, tried to cover up the escape of inmate Lefatia by instructing members of his morning shift at the TCF to “stick to one story”, and furthermore, he told another TCF officer to change the TCF Log so that the record would show that their morning shift did the headcount for inmates on the hour.

Lowe said that Lomu instructed all of the four TCF officers, who were under his control as Watch Commander, to lie to DPS investigators — that Lefatia did not escape. He also instructed the officer who dealt with the TCF Log, Viopapa Vitolio, to create a “TCF fake log.”

“In order to maintain his action, Lomu told Vitolio to stick to the story. He threatened her and harassed her knowing that he would be prosecuted for his actions,” Lowe told jurors.

Escape from confinement is not new in the territory, however, this escape was different because Lefatia went to Leone and shot Sopi Senio at his home in Leone, Lowe said. The victim’s wife, along with the victim’s brother told police that the shooter was Lefatia, the guy that was supposed to be inside TCF.

Five TCF officers were on the morning shift of the day of the alleged incident, according to Lowe. They were Watch Commander, Lomu (defendant); Toloa Koonwaiyou (Field Supervisor); Junior Kuka and Carter Soliai (TCF officers); and Viopapa Vitolio, the only female officer, who worked as the Dispatcher — keeping the TCF log and answering phone calls for their shift.

Lowe told jurors that around 3:30 a.m on the morning of the alleged incident, Chief of Police, Foifua Foifua Jr called Lomu and told him to check Lefatia’s cell to see if he’s inside, and he (Lomu) must call him back as soon as possible.

Lomu called Foifua Jr back an hour later, only after he had made sure that Lefatia was back in his cell inside the TCF, Lowe said, adding that instead of calling the Chief of Police to report the matter, Lomu called his Field Supervisor, Koonwaiyou and instructed him to call Lefatia and inform him that police are on their way, and that he (Lefatia) has to get rid of anything that should not be inside his cell.

Instead of watching inmates to make sure they are all inside their cell, Lowe told jurors that all five officers, who were on the morning shift, including the defendant, were watching movies inside the TCF office. An inmate named, Chico, who was a trustee at the time, was also there.

Lowe said the evidence that the government will present proves the fact that Lomu was the one who tried very hard to cover up Lefatia’s escape.

Anderson in his opening remarks told the jury that the government failed to complete their investigation regarding this matter. And for that reason, they wrongly accused his client for a crime that he never committed.

Anderson said that Lomu was a faithful person who worked hard to serve his country and the American Samoa government as a police officer. His role was to make sure that all inmates are secure inside their cell.

On the morning of the alleged incident, Anderson said that Lomu gave instructions to members of his shift to make sure they comply with DPS investigators. He also wanted to make sure that investigators would get all the information they needed for the case.

Lomu was one of the three TCF officers arrested and charged by the government in this case. The other two TCF officers also charged were Toloa Koonwaiyou and Viopapa Vitolio.

However, after reviewing all the statements and testimony from other witnesses, the government asked the court to dismiss the case against Koonwaiyou and Vitolio, which was granted by the court last year.