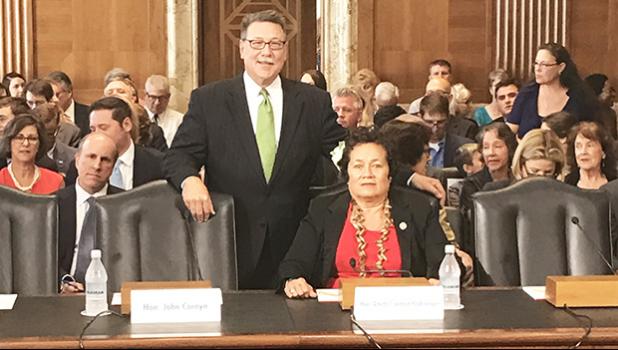 “I applaud the specific recognition given in the executive order to naming the U.S. Pacific territories of American Samoa, Guam, and the Commonwealth of the Northern Mariana Islands as they are an important part of our American family,” said Assistant Secretary Domenech. “This new executive order recognizes Americans who may hail from other Pacific Islands and allows for participation in the AAPI Commission by citizens of the Republic of Palau, the Republic of the Marshall Islands, and the Federated States of Micronesia who have long held a special relationship with the United States under the Compacts of Free Association,” continued Domenech.

“The Office of Insular Affairs’ mission is to support and improve the lives of families and communities in the U.S. Insular Areas. We will continue to carry out this important mission and we look forward to supporting the President and the AAPI Commission in strengthening access to economic resources and opportunities.”

On Monday, May 13, President Donald J. Trump signed the executive order on economic empowerment of Asian Americans and Pacific Islanders to improve the quality of their lives, raise the standard of living of their families and communities, and more fully participate in the U.S. economy. The initiative shall also advise on the implementation and coordination of federal programs as they relate to AAPI access to economic resources and opportunities.

Some highlights from the executive order are as follows:

The full executive order on economic empowerment of Asian Americans and Pacific Islanders, signed on Monday, May 13, is on the White House website.

David Cohen, a former deputy assistant secretary for the Office of Insular Affairs and Aumua Amata Radewagen, American Samoa’s Delegate to the United States House of Representatives, are two Pacific Islander American members of the AAPI Commission. The Office of Insular Affairs serves as the U.S. Department of the Interior’s point of contact for the Federal Working Group of the White House Initiative for Asian Americans and Pacific Islanders.