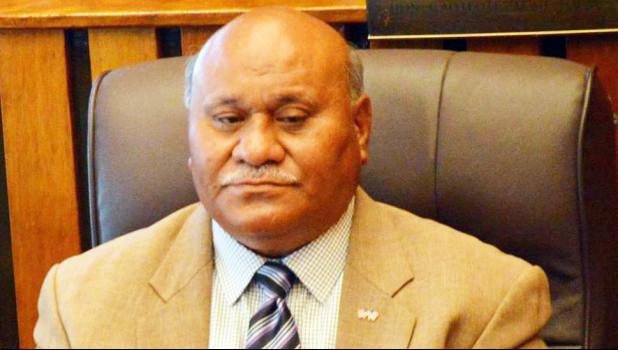 Pago Pago, AMERICAN SAMOA — Senator Faamausili Mau Mau Jr has questioned the authority of the Governor and the Acting Attorney General to review and approve OK Boards for persons allowed into the territory under special provision.

Faamausili, a member of the Immigration Board (IB) pointed out during a Senate Health Committee hearing last week with members of the Coronavirus Task Force (CTF) that under the Law, only the IB can issue approvals for those allowed into the territory under special provision.

Chairman of the CTF, Iulogologo Joseph Pereira responded that under the COVID-19 emergency declaration, the powers of the Immigration Board have been suspended.  He said if a company or agency requires special skilled employees their request goes to the CTF and the AG will issue an OK Board to allow the person to travel from Samoa. The governor’s approval is also required. If the AG is not available then the governor issues the OK Board.

Iulogologo’s response did not sit well with Faamausili, and he said that if that is the case, advise the Governor to dissolve the IB because it’s no longer useful for making any essential decisions with regards to immigration matters.

Iulogologo told Faamausili that the IB still had a lot of work to fulfill and its authority under the law is still there. The only reason why the Governor and acting AG are stepping forward is the fact that American Samoa is now under the COVID-19 emergency declaration.

Faamausili disagreed with Iulogologo’s explanation. He believes that the Governor should not overstep the IB’s authority under the law.

It’s not just citizens of Samoa who will be included in the group of special skills or technical workers being allowed into the territory. According to the testimony of Iulogologo, foreigners with specialized skills who have resided in Samoa for many years will also be accepted.

Governor Lolo Matalasi Moliga said during a CTF meeting last week, which was also aired on KVZK-TV evening news, that flights to bring in special skilled and technical workers would begin Aug. 1st (which was last Saturday) and will continue up to Aug. 17th.

During the hearing, Manu’a Senator Logoai Siaki told members of the CTF they should not allow anyone traveling from Hawaii into the territory but FEMA officials.

In a loud voice Logoai said mothers, fathers and children of American Samoa who have been stuck in Hawaii have been crying to come home but they are being kept out, yet the Governor and task force are letting veterans return.

Logoai told the CTF Chairman Iulogologo and Motusa that they should stop everyone from entering, except FEMA.

The main topic that senators asked about was the FEMA agent who had been returned on the flight she arrived on because she had tested positive for a previous coronavirus test a few weeks before she arrived here.

Health Director Motusa said the woman had a negative COVID test 72 hours before she arrived but she didn’t have a medical report and it was only during questioning by Department of Health (DOF) staff at the airport that her previous positive test was discovered.

He told senators DOH will be making a change to entry requirements to avoid a repeat of what happened with the FEMA agent.

The only two passengers who traveled with the FEMA contractor on July 17 were a returning veteran, Rep Faimlealelei Anthony Allen,and his wife.

Motusa explained that veterans are referred by the local VA doctor for medical appointments in Hawaii. Their return to the territory Is a decision by the VA and FEMA . DOH requires that they have a negative COVID 19 test 3 days before they arrive in the territory.

Senator Logoai said if travelers from Hawaii are prohibited from entering American Samoa, the same rule should apply to veterans.  He said if veterans want to go off island they should stay there and not be allowed back in because they may bring back the virus with them.

He asked what’s so important about veterans when we have so many of our people crying to come home to their families but the Task Force and the governor are stopping them?

Senate President Gaoteote Palaie Tofau echoed Logoai’s concerns. He said there have been many complaints directed at the Senate from residents who cannot return home.

He said it’s lapses in enforcement of the protective measures that will allow the virus into the territory.

Senator Satele Galu Satele was adamant that the only way to stop the virus is to close the airport and not let anyone in or out.

Referring to those who left on the medical charter last week Satele said they traveled to the virus.

He said all of the government’s preparations, equipment and facilities will be for naught if there’s one case of coronavirus on the island.  “Our small population will be gone,” he said.

Satele did not have much faith in people observing rules at the quarantine sites. “Our people are hardheaded and will defy the rules. You lock them down for 14 days, they’ll find a way to get out and roam around, unlike palagis who will obey the rules.”