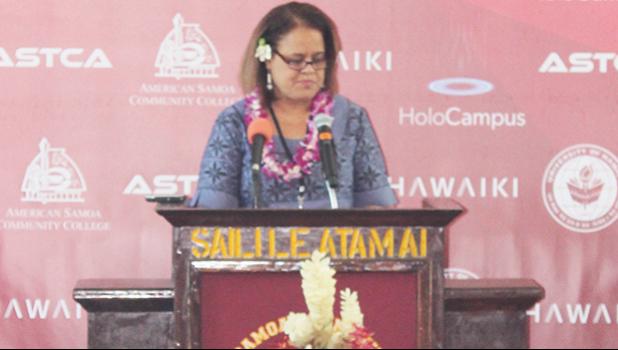 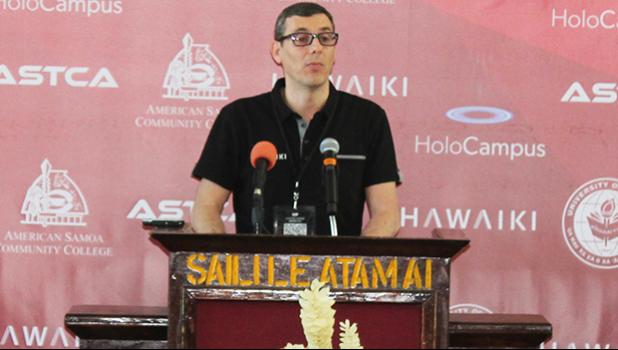 Pago Pago, AMERICAN SAMOA — Tuesday’s launching of a new digital platform 3D Hologram at the American Samoa Community College (ASCC) has been labeled a “historic” moment in the territory, with ASCC president, Dr. Rosevonne Makaiwi Pato saying it’s “history in the making as we move forward in the advancement of technology.”

Dr. Pato noted with appreciation the partners involved in making the hologram project a reality, such as Hawaiki Submarine Cable, the University of Hawaii and the American Samoa TeleCommunications Authority (ASTCA).

“Welcome to a moment that will be looked back on as a historical landmark for American Samoa,” she told the audience, which included ASCC board members, ASG Employees’ Retirement Fund (ASGERF) chairman, Va’anatiu Tofala Iafeta and executive director, Iaulualo Talia Fa’afetai as well as Congresswoman Aumua Amata and several cabinet members.

Dr. Pato explained that this project took many months to plan and “many minds” to put it together, “but it is happening...now.” She pointed out that this “very historical moment” for ASCC with the HoloCampus “changes the phase of education and instruction.”

Furthermore, the launching of the HoloCampus sets a “pace for technology advancement that our students and our economy, and future economy can benefit from.”

“What is required from all of us, is to take this one step forward, knowing and being certain what our vision is,” she continued. “Too many times we start with an idea, we allow it to grow and it takes off rapidly to the point that we forget what our vision really was.”

“We cannot allow this to happen today,” she said. “With this advancement that is the first in the Pacific, we cannot allow it to grow rapidly to the point that we created a jungle. We have to allow it to be put into place, so our vision and our purpose continues.”

She added, and noted that as the only public institution of higher learning in the territory, ASCC is responsible for the development and advancement in technology, with a focused vision and a purpose.

The purpose for this provision for what’s happening today, “is that we have a grounded education… providing learning opportunities for our students and for the community that will open doors and future doors to a strong economy in American Samoa.”

“These doors will also broaden our view point within the region, as well as open the doors to the world,” she said.

“Today we make history and we witness what teamwork really does in order for something as huge as this hologram project to take place,” she continued.

She told the audience that ASCC has a “major project happening” later, after the HoloCampus launch, which “will broaden and strengthen our economy and those that will be preparing for the technical fields.”

Gov. Lolo Matalasi Moliga wasn’t able to speak at the launching, as he was in meetings Tuesday with Bank of Hawaii officials who were on island to take part in the government sponsored BoH exit ceremony at Utulei. The Governor’s Chief of Staff, Fiu J. Saelua read Lolo’s prepared statement.

“Never in my wildest dreams and imagination, that when I was watching Star Trek in my younger days, the popular phrase of ‘Beam me up Scotty’ would be realized during my lifetime,” Lolo wrote.

“But here we are today, witnessing the implementation of this concept, by beaming hologram images of instructors from” UH to ASCC students, who will “benefit from this new platform of knowledge transfer.”

According to the governor, the territory’s “greatest disadvantage, negatively impacting its efforts to grow its economy and to improve the quality of life of its people, is its isolation and the tyranny of distance from the United States and major industrialized countries of the world.”

However, that is now improved with the HoloCampus at ASCC. (See Samoa News online version of this story, for the complete text of the governor’s statement.)

Hawaiki was represented by the company’s executive director and chief operations officer, Ludovic Hutier, who said it’s an honor for him to be in the territory to “witness this historic moment.”

He said there are two “exceptional milestones” being celebrated on Tuesday — the first being the first anniversary of the American Samoa branch connecting to Hawaiki — launched in July last year — and the launching of the HoloCampus remote learning platform.

Since the landing of the submarine cable here 13 months ago, he said Hawaiki and ASTCA “successfully completed step one and that is, deliver exceptional broadband connectivity and highspeed internet” to the people and businesses in American Samoa.

And since the cable landing, the Hawaiki and ASTCA “partnership has been growing stronger every day,” he said and thanked ASTCA board chairman, Iulogologo Joseph Pereira and CEO, Lewis Wolman for their continued support.

He explained that the 15,000-kilometer Hawaiki cable system linking New Zealand, Australia, American Samoa, Hawai’i and the US west coast, “has been instrumental to unlock the capacity market and reshape international telecommunication in the South Pacific region.”

“We are very proud of this achievement but most importantly, is that Hawaiki cable can be an enabler for social and economic progress, and positively impact the life of our communities, especially in the education area,” he said.

He thanked the partnership between Hawaiki, ASCC, and UH, that “we are now able to complete step two — the most important of all steps — launching of HoloCampus” which will “revolutionize the way we learn in the Pacific.”

This initiative, combining the forces of technology and education leaders would not have been possible without the help and the support of ASCC president, he said.

On behalf of the Hawaiki board of directors and its founder and CEO, Hutier thanked the governor for his “vision and longtime support [that] we are now in a position to redefine how schools and universities connect and collaborate in American Samoa and the Pacific region.”

At the start of the launching ceremony, Iulogologo delivered special remarks thanking all the partners involved in the hologram project, as well as acknowledging previous ASTCA board chairman and late ASTCA CEO, Pulele’iite Liamatua Tufele.

He said the hologram project “reveals the wisdom of our leaders’ decision to invest in Hawaiki to capture economic and social benefits inherit in this project.”