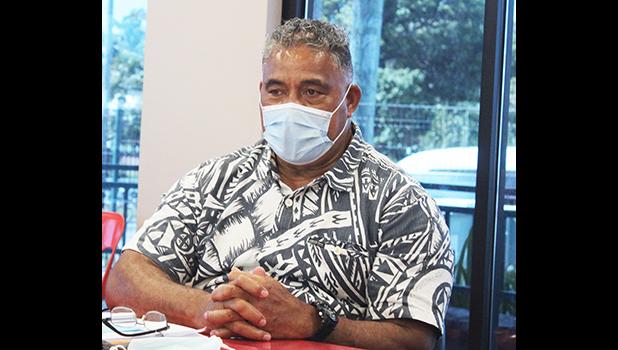 This is according to Health director, Motusa Tuileama Nua, responding to media questions at yesterday’s DoH news conference providing an update on the COVID-19 vaccination and the government’s repatriation program for American Samoa residents stranded in the US.

Motusa said the government has completed its transition to the new administration and a new COVID-19 task force is in place with Talauega, the new chairman. He also said that Talauega is the new GAR while the assistant GAR is Fainu’ulelei Falefatu Ala’ilima-Utu, the current acting attorney general.

(During the Lolo Administration, Lemanu — who was lieutenant governor — served as the GAR).

Asked by the news media about how many members are now on the new COVID-19 task force and who is the vice chair, Motusa responded that he doesn’t have the answers to these questions at this time.

“But changes have already been made and gone up to the Governor’s Office. I think they are going to minimize the number of key-people [on the task force],” he said, and pointed out that the task force will also oversee the overall repatriation program, COVID-19 vaccinations and covid-19 tests given out at the Seaport — or Pago Pago Harbor — referring to tests given to crews of incoming vessels and other related matters.

“So it’s going to be a three-tier level for the task force to monitor all that” and it also involves DoH, LBJ Medical Center and the local VA Clinic, he said.

No indication at press time if Lemanu will make public an order creating the new task force, its members and chairman. But DoH and LBJ yesterday gave Lemanu and other ASG senior officials a briefing on COVDI-19 including the repatriation program.

The previous task force appointed under the Lolo Administration had 21-members and chairman was Iulogologo Joseph Pereira — who was also Lolo’s executive assistant.

Last month, Lolo told his cabinet directors that the task force would remain in place through the end of January or until the new Administration — of Lemanu and Talauega — made their own changes.

And the task force was tasked with — among other things — conducting and performing the required work to ensure that the governor and the lieutenant governor “receive comprehensive information and recommendations on the Coronavirus for them to make decisions.”

Eight members are continuing on from the previous Task Force: