Gubernatorial team of Sen. Nua and Tapumanaia first to announce 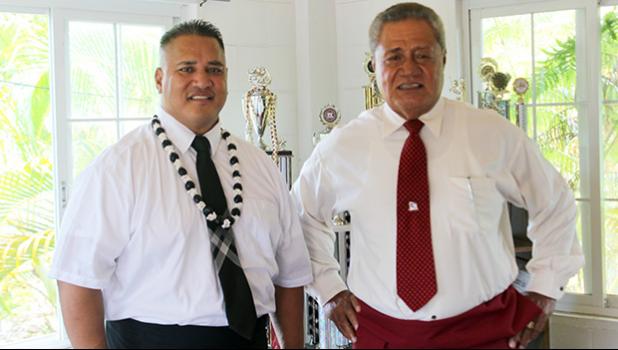 Nuanuaolefeagaiga and Tapumanaia made the official announcement on Valentine’s Day, yesterday, during a Samoa News/ KHJ News interview at the senator’s home in Tafuna.

“It is a such a blessing to be given this opportunity,” said Tapumanaia, adding that on behalf of his wife, his children, and family, he is "honored to accept this invite to be Nuanuaolefeagaiga’s running mate and prepare myself to do what I need to do, on this new journey and in my desire to serve our people.”

He said that these types of “blessings don’t come often."

But after "much thought, prayer, and soul searching, it has been clear to me, that now is the time for me to stand up and showcase my desire to the people of Tutuila and Manu’a to serve in any capacity that I can, to help our people.”

Tapumanaia publicly thanked his family, “especially my father”, Paramount Chief, Sen. Satele Galu Satele Sr., and his father in-law Fagaima Milovale Solaita “for giving us the blessing to move forward and to accept this opportunity to serve our people in this capacity.”

“I’m honored that he has considered and selected me to be his running mate, and I look forward to our team doing some great things next year to showcase what we’re about, and we move forward from there,” he said.

Since last year, Tapumanaia’s name has surfaced as a Lt. Governor candidate for 2020. At the same time, political whispers had it, that Sen. Satele didn’t want his son to run as a candidate for Lt. governor because of his close family ties with another possible gubernatorial candidate.

During the interview yesterday, Samoa News sought some details from Tapumanaia, on what his father, Sen. Satele had said during those private conversations.

Tapumanaia explained that his father’s concern “is basically — that we don’t put a divide on our families — just like in any other political race here on a small island.

“But one thing that was certain with him, is that if this was my goal and if this is what I wanted to do, he wanted me to be sure that I do it with everything that I have, and not second-guess myself,” he noted.

Tapumanaia said he was asked in previous elections to run as a Lt. Governor candidate but his father told him to wait, and this was the same message from many of his family members.

“Now in 2019, looking at the 2020 election, there are some of them who still think I should wait. But I think at this time and age for myself — 55 years old next year — for me, this is the time I need to step up, while I have the energy and while I have the desire,” he said. “Because when I get into my 60s, I think for me, that’s when I want to give it to the next generation.”

He recalled what his grandfather — the late former Sen. Tuana’itau Tuia — would often say, “Life is not about what you have, it's about what you give,” and acknowledged that he grew up under Tuanaitau’s “tutorials and preparations for a time that I can also offer myself as a servant to our people.”

He continued, “I’ve always considered an election, not as a race, or a competition. I think it’s an opportunity to offer yourself as an option to the people.”

Since he didn’t do well in the Tualauta race last year for the House, Tapumanaia was asked why he believes this is his time to run in the gubernatorial race.

“I think the result of the election doesn’t define me as a person,” he replied. “And I also don’t think that the election results define what people think of my abilities.”

“When the results come in and you’re not chosen by your district, that doesn't mean you’re not a good person. That doesn’t mean you can’t do the work.

“I didn’t go hide underneath a rock. I found other ways and means to continue to serve the people. I look at other opportunities,” he said.

At the outset of the interview, Nuanuaolefeagaiga said he has observed Tapumanaia for the past five years, and he has seen Tapumanaia on the front page of Samoa News and on TV planning and navigating food baskets for low-income residents of American Samoa, and people appreciate the program.

“To me Tapumanaia has the courage and loyalty to his people. His skills and courage will help defend our people and uphold our traditional values,” he said. “The skills he has will show the courage to try and resolve our differences with federal government policies and regulations applicable to our territory.”