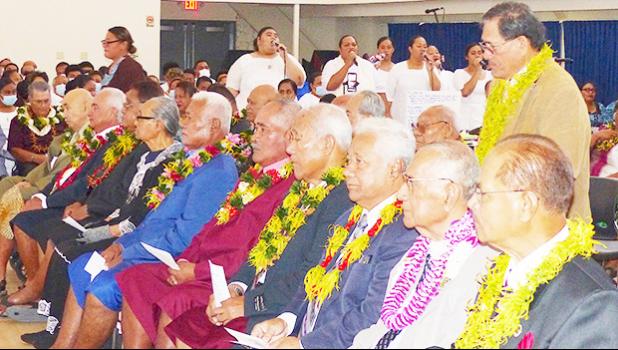 The nominations were introduced last Friday in the Senate and assigned to the appropriate committee for confirmation hearings.  Along with the nomination letters, all dated Jan. 12, the governor also submitted to the Fono, resumes and other information — including copies of college degrees —  to lawmakers for their review.

For ODAPM, the governor nominated, Lisa Tautalatasi Tuato’o for the directorship saying that the nominee has dedicated over 20 years of service to ASG. “Her extensive experience in grant management and administrative operations makes her an ideal candidate for this post,” the governor wrote to Fono leaders.

Prior to taking over the leadership post in January 2021 — after the Lemanu-Talauega Administration took office — Tuato’o worked in various capacities with the local Homeland Security Department (ASDHS) from 2008 to 2020.

For TEO, the governor nominated Dr. Misipati Salanoa, saying that the nominee has served the territory for 34 years and his “vast knowledge from his years of experience with drafting reports, field work and communications make him the ideal person for this position and I highly recommend him”.

According to his resume, Dr. Salanoa took early retirement in May 2018 after 34-years of service in ASG but he also served as the assistant manager of field operations for the 2020 American Samoa Census, and had worked with the Commerce Department for many years.

He holds a Doctorate in Organizational Leadership and a Masters degree in Education Administration.

At OPI — which operate the state-run KVZK-TV — the governor nominated Aoelua Solomona Aoelua, who has been serving as acting director since the current Administration took office in January 2021.

According to his resume, Aoelua worked at KVZK-TV from 1970 to 1974, first as a cameraman and audioman and later was promoted to TV producer director — which is also cited by the governor in his nomination letter to Fono leaders.  Aoelua attended Columbia School of Broadcasting in Los Angles, and interned at TV stations in the Los Angles area at the time.

Between January 2013 and May 2019, Aoelua served as executive assistant to then Lt. Gov. Lemanu and prior to that was deputy chief of staff to the office of the late Congressman Faleomavaega Eni Hunkin.

Aoelua’s “extensive executive management experience in addition to his working knowledge of media operations makes him an ideal candidate for the position,” the governor wrote to the Fono leaders in his nomination letter.

The three director-nominees were among the measures the governor said during his State of the Territory Address to the Fono last week Monday that he planned to submit to the Legislature for review and final decision.

Other measures include confirmation of board members and proposed legislation dealing with the ASG Employees Retirement Fund.