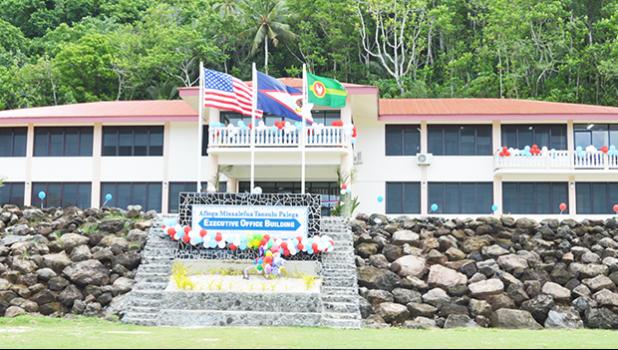 Gov. Lolo Matalasi Moliga has given all departments and agencies with satellite offices on Ofu island in Manu’a a directive to terminate their individual leases with their landlords, and prepare to move into ASG’s Afioga Misaalefua Tausulu Palega Executive Office Building on Ofu island, by the middle of this month.

In a June 29th memo to directors, Lolo pointed out that ASG’s investment in the construction of the Ofu administration building is prompted by a commitment to improve government services to residents of Ofu and Olosega by the physical presence of government agencies.

He reminded directors that the new two-story administrative complex has been dedicated and ready for occupation. The dedication was held in early May this year.

Accordingly, Lolo says all government agencies with satellite offices on Ofu and Olosega are to move their operations to the new Ofu administration building and this move is to be completed by July 17th.

In his memo, the governor informed directors that notification should be issued to their current landlords to announce termination of the leases on July 31st.

Since the administration building must be maintained continually to extend its “structural integrity”, Lolo says a cost sharing agreement will be formulated and discussed with all directors, whose offices will be the occupants of the Ofu building.

The Ofu EOB, with construction that started in 2014, consists of seven ASG offices, a lobby, kitchen/ dining area, and lavatories. On the second floor there is also the conference room, and lavatories. A Samoan fale is located on the left side of the building.

It wasn’t immediately clear as to how many government agencies have satellite offices on Ofu and Olosega islands. But during the building’s dedication ceremony, the governor made clear to directors to utilize this facility to better serve the people of Manu’a.

Samoa News notes that Manu’a Cession Day is July 16th which falls on a Sunday this year, and the government usually observes the holiday on the next day, July 17th. The official notification of the Manu’a Cession Day, should be issued soon by the governor. This year marks the 113th year since the Manu’a island group was ceded to the United States and became a part of American Samoa.