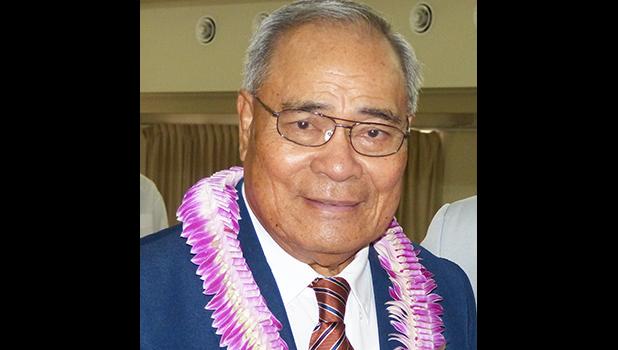 Gov. Lolo Matalasi Moliga believes another federal government shutdown towards the end of next week is inevitable and has urged cabinet members, whose agencies are funded by grants, to keep in close contact with their federal grantor.

Current federal funding, which became effective Jan. 23, after a three-day partial shutdown of the US government on Jan. 20, expires before midnight of Feb. 8. Before that shutdown, the governor issued an advance order outlining procedures as well as exempted services in the event of a US government shut down.

The governor rescinded that order on the evening of Jan. 22 when the US President signed into law “stop-gap” funding approved by Congress. However, as of last week to yesterday, national news outlets are reporting that both sides in Congress are far from reaching a compromise for new funding before Feb. 8th.

Speaking at last Friday’s cabinet meeting, Lolo said he believes another federal shutdown will occur after Feb. 8, based on information coming out of the nation’s capital, if Congress doesn’t come up with a budget solution.

Lolo said recommendations have already been put out — through the previous order — regarding local government operations in the event of another federal shutdown. Additionally, departments and offices that receive federal funding for their operations need to continue to improve their communications and keep in contact with their grantor.

He says the various issues in Congress are not easy to tackle and it’s important that ASG be well aware of what’s happening in Washington D.C.

According to the governor, his office has communicated with the US Department of Interior regarding any new plan if there is another federal government shutdown, which impacts local government operations.

Lolo reiterated to directors to keep in continuous communication with federal grantors to be updated on what’s happening at the federal level pertaining to local operations. For example with travel, there is no reason for a director to travel Washington on Feb. 9 —in the midst of a federal shutdown, he said.

Of the more than $394 million in the ASG’s approved fiscal 2018 budget, $21.52 million comes from USDDOI for ASG basic operation; $10.32 million in Capital Improvement Projects; and $112.34 million in federal grants, according to FY 2018 budget documents.

And of the 6,555 individuals in the ASG workforce in the FY 2018 budget, over 2,260 positions are paid by federal monies. (Samoa News notes that there are several positions in which an employee’s salary is split between local and federal money.)

USDOI’s Office of Insular Affairs has a contingency plan in place in the event there is a lapse in federal funding and the feds close down. For example, the Chief Justice and Associate Justice of the American Samoa judicial branch are “designated as essential” federal employees and are exempted from a shutdown.

According to the contingency plan, which is posted on the agency’s website, the presiding judges — who are appointed by the US Interior Secretary — are paid as federal employees and that continued operation of the court is required to preserve law and order.

There are at least three ASG departments that are 100% funded with federal monies — ASEPA, DHSS and the TEO — which are not considered ‘essential’ in the federal shutdown.