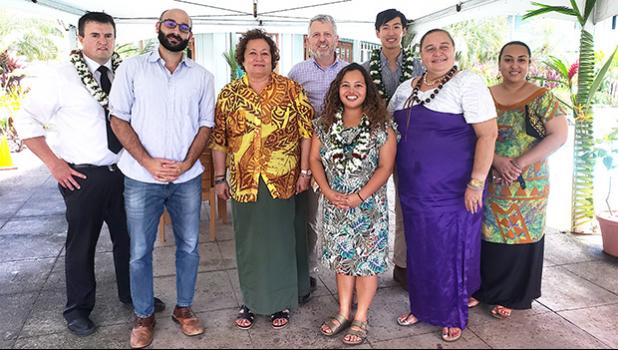 Pago Pago, AMERICAN SAMOA — The four team members from the US Government Accountability Office (GAO) — the investigative arm of the US Congress — have been busy with meetings since their arrival on island last Thursday night to assess the impact of the federally mandated minimum wage on the “economic health” of American Samoa.

Prior to meetings last Friday morning, the GAO team held an “entrance meeting” with the governor and his senior staff. Thereafter, the GAO team toured the StarKist Samoa facility and met with StarKist Samoa officials for employer interviews, followed by two separate employee discussion groups — of between 6 to 10 employees, according to the team’s schedule.

Yesterday’s meetings included the US Department of Interior and NOAA, followed later with officials of the ASG Commerce Department and Treasury, Human Resources, and the Office of Budget and Planning.

Tomorrow is the visit to LBJ Medical Center followed by follow-up meetings with the ASG Tax Office and Commerce Department. Also while on island, the team will also tour ASEDA funded projects, such as ASTCA and the MV Manu’atele.

Before the GAO team departs this Thursday night, they will meet in the morning with the American Samoa Chamber of Commerce, and they will have an exit meeting with either the governor or lieutenant governor, along with senior staff, at the Governor’s Office.

The team will also meet with the 7-member ASG Minimum Wage Task Force, established by the governor “to develop our strategy to support our position that the current federal minimum wage law is reckless and unreasonable relative to its devastating financial impact on the economic health of American Samoa.”

“In 2015, I sponsored a bill which passed into law, in which Congress directed the GAO to conduct this study of our minimum wage for 2020,” said Aumua Amata. “I’m happy to see the GAO team at work here in American Samoa, learning firsthand about our economy, so we can have the best possible minimum wage policy going forward.”

According to the law (Public Law 114–61), the GAO is tasked with a report on American Samoa’s minimum wage, changes in the cost of living, and the local economy. It is a result of Congresswoman Amata’s bill, H.R. 2617 in the 114th Congress, amending the Fair Minimum Wage Act of 2007. The purpose of the study is to know how the minimum wage in American Samoa lines up with the cost of living over time.

At the time, in 2015, Congresswoman Amata’s bill prevented a spike in the minimum wage of 50 cents per year that the local economy could not absorb, and postponed a new lesser increase for three years. Instead of the previously scheduled increase, a more manageable minimum wage increase of 40 cents every three years (about 13 cents a year) was put in place, which allows employers to plan ahead and budget, knowing of each three-year change in the future. This protects the economy from steep increases and protects employees from inflation.

“Thank you to the GAO team and all their efforts, as they work with Governor Lolo and his team on this important issue,” said Congresswoman Amata. “This report will be the basis for Congress to examine our territory’s minimum wage and how it impacts our economy.” (Source: Office of the Congresswoman)