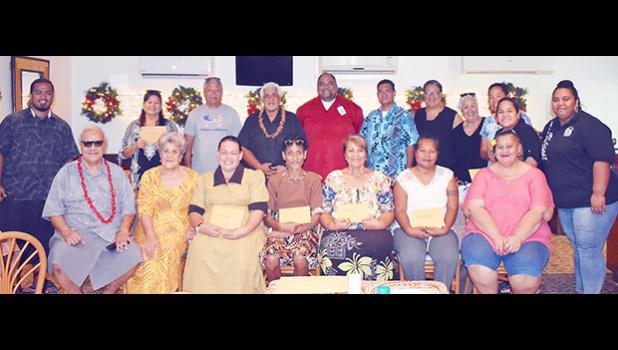 Pago Pago, AMERICAN SAMOA — The Galea'i Peni Poumele Cancer Foundation hosted a special luncheon last Friday, Jan 11, for its stipend recipients. Altogether, 15 cancer patients were awarded stipends of $2,000 each from the Foundation, which has been in existence since 1992.

The financial assistance goes a long way in helping local cancer patients and their family members.

Current Foundation president, Poumele Apisa Pete told Samoa News yesterday that their goal is to "work together" with other agencies and programs, "to help people with cancer because it can't be done by just one organization."

Poumele said every year since 1992, the Galea'i P. Poumele Cancer Foundation has issued the same amount — $2,000 — to each of its recipients. And while the monetary assistance may seem like a lot to some, Poumele said they always looked at it as being small, because they know how costly cancer-related treatments can get.

He reflected back to when his father was diagnosed with cancer, and said the medical bills added up — “even getting a second opinion costs money."

According to Poumele, their Foundation is happy to be working together with the American Samoa Community Cancer Coalition "to do these kinds of things."

He said that over the years, under the Community Service Block Grant (CSBG) administered by the Dept. of Commerce, the Foundation has been fortunate to receive well over $100,000 and every cent (100%) of that money has been disbursed to cancer patients.