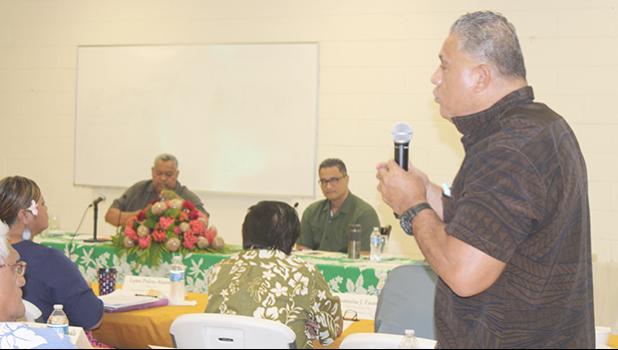 Gov urges cabinet members to get their employees vaccinated
By
Fili Sagapolutele
fili@samoanews.com

Lemanu briefed the cabinet during last week’s meeting on the repatriation budget towards the end of the cabinet meeting, when he spoke about the importance of government projects moving forward, instead of delaying them, saying that there is already a lot of money allocated for the many projects.

He said the only program that is running low on funds is repatriation, which is overseen by the COVID-19 Task Force, chaired by Lt. Gov. Talauega Eleasalo Ale, who has been informed of this situation — the budget running low.

According to the governor, the repatriation program has a budget of $8 million and — as all cabinet members are fully aware — the cost to operate a flight is close to or nearly $2 million. With three-repatriation flights — two in the last two months and one this month on Apr. 15th — that’s near or close to $6 million in total, he said.

Earlier in the cabinet meeting, the governor urged cabinet members to have employees in their respective ASG entities vaccinated for COVID-19 saying that he and Talauega have received reports and information that several ASG agencies have not had their employees vaccinated, especially “our first responders” — who are on the frontline to protect the community and therefore should get vaccinated.

He urged cabinet members to make it a priority for their workers to be vaccinated within each ASG agency. He said that if the government is urging the community to get vaccinated, ASG departments should do the same and set an example by getting employees vaccinated.

Lemanu points out that US President Joe Biden has put out the same message for people, who qualify, to get vaccinated. He also points out that financial resources — such as vaccination and preventive measures — are provided by the federal government to carry out and implement these responsibilities to keep the community safe.

Health director Motusa Tuileama Nua gave a brief update on the vaccine doses and number of people who have been vaccinated in the territory. As of last Thursday morning, local population eligible for the COVID-19 vaccine — age 16 and up — is 33,306.

Those who have received the first and second doses total18,855 and those who have gotten the first dose is at 1,668.  Motusa said another shipment of vaccine was expected on the cargo flight this past weekend.

For COVID-19 tests, 4,677 tests were conducted — as of last Thursday morning — and there were six positives at the Pago Pago Harbor and these were crew members on vessels but no local transmissions. Total test sample available on island is 9,846.

For the next repatriation flight on Apr. 15th, he said 238 are in Honolulu and are currently in quarantine. Motusa said the goal of the task force is to have 220 passengers on each flight.

Additionally, the task force is already working on the repatriation flight manifests for May and June.

Lemanu — again — urged cabinet members to have their employees vaccinated and call on the public to do the same, saying that changes in future repatriation flights, depends on the local population being vaccinated.