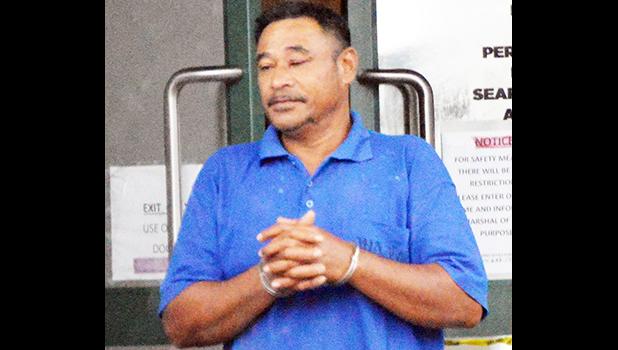 Pago Pago, AMERICAN SAMOA — A 48-year-old male from Samoa accused of recklessly causing the death of another male by throwing a speaker and a knife, both of which hit the victim’s chest, is now in custody after he was arrested by police this week.

Fala is charged with one count of manslaughter, a class C felony, punishable by a term of imprisonment of up to seven years, a fine of up to $5,000, or both.

Preliminary examination is scheduled for May 28th at 9a.m.

On May 16th, 2020 around 3:19a.m, an employee of the Titanic Corporation in Vaitogi contacted the Tafuna Police Station for assistance after he discovered the body of one of his colleagues lying on a bed in a pool of blood unresponsive — inside an abandoned house.

Police officers responded to the call and questioned several witnesses regarding the incident.

This is the story from employees of the Titanic Corp. of what allegedly happened.

On Friday, May 15th, between 4:30p.m- 5p.m, the owner of Titanic Corp., along with five of his employees, including the defendant in this matter got off from work at the company’s compound in Vaitogi and all went to cash their checks at a store by buying their beers and cigarettes. After cashing his check, the defendant went home.

A few moments later, one of the employees received a call from ASPA (American Samoa Power Authority) needing assistance to repair some water pipes. Two employees responded to the call from ASPA, while the other two employees, including the victim in this case left to play pool first at Kelemete’s residence across from Iakina SDA church in Iliili.

After spending A few hours at the pool table place, the victim went home to take a shower. The employees are staying inside the Titanic Corp. compound in Vaitogi.

The victim kept asking the defendant to pay him his money but the defendant continued to ignore the victim’s plea and a verbal argument continued between the two men for a few minutes until another employee intervened and tried to stop the argument.

The employee asked the victim why he was bothering Fala (defendant), so the victim told the employee that Fala borrowed $20 from him last week and today (last Friday, May 15) when they got paid, Fala only paid him $5, but he thought that Fala would pay him back the full $20. This led the victim to argue with Fala.

After the other employee broke up the verbal argument between the defendant and the victim, the defendant angrily walked away from the house. The victim yelled out to Fala, “you thief”, which made Fala come back toward the victim, holding a knife and pointing it at the victim and saying to him, “I will stab you with this knife if you talk to me again.”

The victim immediately stood up also holding a knife in his hand and responded to Fala by saying, “I will stab you too if you continue to threaten me.”

The employee told police that while the two men argued, they pointed their knives at each other and made threatening remarks that each one would stab the other one to death.

The employee was able to separate the two men and immediately pushed the victim away and walked with him to the other side of the house. The employee then told the victim that they should go and play pool and leave Fala alone at the house.

As the victim and the employee started to make their way to the other side of the house, Fala followed them and called the victim several names. The victim was very upset and walked back to Fala and the verbal argument immediately started all over again.

According to the defendant’s statement to police, he was shocked when the victim approached him with a knife in his hand and threatened to kill him. He got scared so he just turned to the refrigerator to get some water. When he turned around, the victim allegedly punched him in the face causing a minor laceration.

This got the defendant upset and he grabbed an audio speaker with the same hand he was holding the knife and threw both speaker and the knife towards the victim causing an injury to the victim’s chest. The victim fell backwards on the ground. Fala stated to police that when the victim hit the ground, blood gushed out of his chest. He then saw the employee who was trying to break up their argument rush over to the victim.

Fala further told police that right after the victim fell on the ground, he (Fala) grabbed his beers and went to catch an aiga bus. The aiga bus was getting ready to depart to go to the cannery area in Atuu.

When the driver of the aiga bus hopped inside his bus, he saw Fala sitting in the back seat and heard Fala saying, “that’s what he gets for being a tough guy and he’ll be lucky if he wakes back up.”  Fala caught a lift from the aiga bus to go play pool at Kelemete’s residence in Iliili and stayed until closing time between 1 and 2 a.m on the morning of Saturday, May 16th.

POLICE CALLED TO THE SCENE

The same employee who attempted to separate the defendant and the victim was interviewed by police. He told police that he helped the victim onto the bed by carrying him chest to chest. He felt sorry for the victim so he wiped the blood from the victim’s chest and from the floor, not knowing that the victim’s injury was critical.

According to the witness, he rushed to the victim’s house and touched his hand, but his hands felt hard and cold. That is when he contacted police for assistance.

Police arrived at the house and discovered the body of the victim lying shirtless on an uncovered queen size bed. What seemed to be blood was seen on the carpet, starting from the door to the bed.

Police examined the body and found that the rigor mortis process had already started. The body of the victim was transported to the LBJ Hospital by EMS personnel and was examined by Dr. Siliasau at the morgue. The victim suffered a 1.45 inch puncture wound on the left side of his chest and an abrasion below the puncture wound.