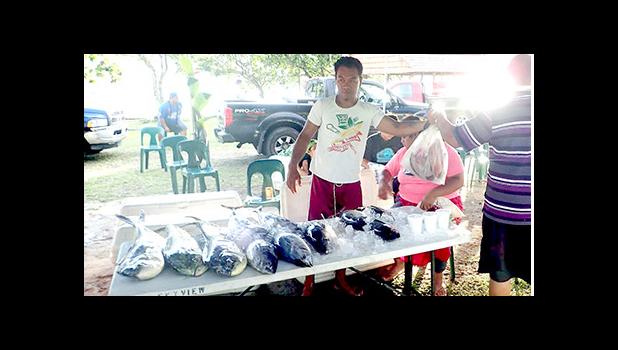 The excited fishermen started setting up before 6 a.m. but by then, anxious customers were already waiting in line to get first pick of fresh seafood.

Staff members from the Department of Marine and Wildlife Resources (DMWR) boat-based and shore-based creel survey teams were there to help the local ‘alia commercial fishermen set up their displays and sell their catch.

That morning, coolers full of fish — of various sizes — as well as other items including lobster and crab, were being lugged on to the beach malae and their contents were emptied onto tables covered with ice as community members stood by patiently.

Consumers who spoke to Samoa News were pleased with the event, saying that ‘nothing beats fresh seafood’ and ‘pop up’ vending booths like the ones last Saturday — and they should be promoted and allowed to open up more often than not.

This type of ‘Fresh Fish Market’ is a collaborative effort between the DMWR and DOC.

Pictured is a local ‘alia fisherman completing a transaction which included a bag full of fish and one satisfied customer.