Fresh fish export could be a boon to local economy — but supply remains a problem — can longliners help? 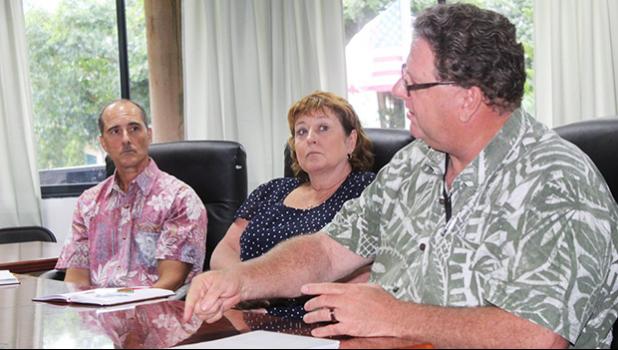 As previously reported by Samoa News, Island Fisheries has signed a two-year lease to operate the Fish Market inside the Fagatogo Marketplace, and the company is purchasing fish from the US longline fleet based in American Samoa for the fish market.

At the same time, Island Fisheries has sent its first shipment of fresh fish off island to the US market. However, Island Fisheries is facing a fish supply shortage. (See Samoa News edition July 3rd for details).

Samoa News learned that the government is looking at efforts to boost the volume of fish for Island Fisheries’ export business— which is the type of business that the Lolo Administration has been encouraging for a couple of years. Meanwhile, more than a year ago Hawaiian Airlines dedicated its freezer facility at the Tafuna airport to help with local export of fish.

The meeting with officials of Hawaiian and Island Fisheries was “to discuss ways to increase the volume of fresh fish — mainly big eye and yellow fin tuna — exports to off-island markets,” Lafaele said, adding that the target markets for exports are Honolulu, Los Angles and Japan.

The DOC director explained that, “we have had meetings with Hawaiian on the issue of exporting products from American Samoa using excess cargo capacity on flights back to Honolulu.”

He said Wednesday’s meeting was the first one involving a fish exporter — namely Island Fisheries.

“The main issue of the meeting is that Island Fisheries isn't getting sufficient fish from local fishermen to sustain its fresh fish export business,” Lafaele explained. “Factors contributing to the problem were discussed and we will meet again in the near future to discuss possible solutions and implement a viable action plan.”

Association president Christinna Lutu-Sanchez explained that Island Fisheries’ business model was to assist the alias and small boats with an alternate market. “However, despite the good rates that they offer, they have not received any fish from the alias,” she said.

“We — the longliners — have provided fish so that there is a supply to the fish market, however this is very limited as our boats are setup to catch fish and freeze them for the cannery and not to export,” she points out.

In order to meet fresh fish requirement for an export market, she said that the longline fleet “would need to make changes and invest in different equipment.”

(Samoa News understands that one market being targeted for export is the fresh fish market for restaurants and this means never frozen fish, only chilled.)

“The longline fleet has been suffering dire financial situations,” she said, “and I am not sure that any of the owners are in a position to make additional investments at this time —especially as there is no support from local government on measures that we have sought such as the temporary amendment to the Large Vessel Prohibited Area to relieve some of the extreme circumstances and help to keep the longline fleet afloat.”

Samoa News notes that the longliners have sought to be allowed to fish within certain limits of the LVPA on territorial waters.

Responding to the Samoa News request for comments, Hawaiian spokesperson Ann Botticelli explained that the airline’s cargo team is in the territory to look at its “new chiller facility, which we are very excited about.”

“One key motivation in developing this facility has been to facilitate a path for the development of a local fresh fish export market in American Samoa,” she said yesterday from Honolulu. “When we researched such a market, we found that there was great demand for the delicious fresh sashimi-grade fish that's so plentiful over there.”

She points out that fishing boats in the territory “need a certain type of ice machine to keep the catch chilled but not frozen” and she believes that there’s a National Oceanic and Atmospheric Administration grant being sought to assist with that.

“Our team is in American Samoa to provide support as needed. Our main contribution to this — installing the chiller — is complete, and we couldn't be happier about that,” she said. “We look forward to being able to transport fresh American Samoan fish to tables throughout the Pacific and beyond.”