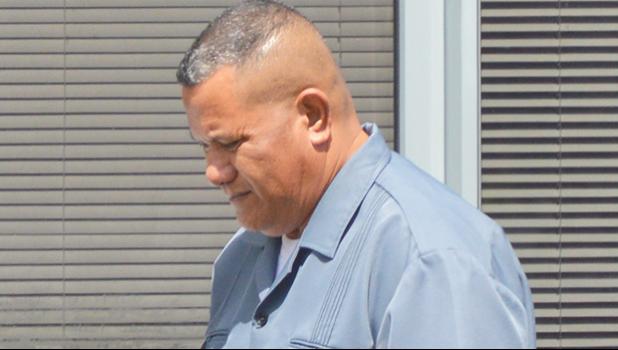 Pago Pago, AMERICAN SAMOA — The former DPS police lieutenant convicted of sexually harassing a fellow female officer while in uniform earlier this year in April is going to jail.

Siaosi Aiono, who told Samoa News via a telephone interview in April this year that he did not sexually harass a female officer, was sentenced to serve 15 days at the Territorial Correctional Facility (TCF) by District Court Judge, Fiti Sunia.

The imprisonment term is the maximum sentence for the misdemeanor charge of third degree assault, which Aiono pled guilty to, last month.

“This is not the behavior you were sworn-in to do, and you are not above the law,” Sunia told Aiono when he delivered his decision.

Aiono, who is now a bus driver, appeared in court yesterday morning for sentencing.

When given the chance to speak Uiagalelei informed the court that his client did not wish to make a statement. Uiagalelei then asked for a probated sentence.

The defense counsel told the court his client has taken full responsibility for his actions, and he’s truly remorseful for what he did. According to Uiagalelei, the incident which led to his client being charged and convicted, was out of his character.

“We can’t say how this issue came out into the light; however, my client is truly remorseful. Therefore, I ask the court for leniency."

The government attorney echoed the defense’s submission, saying that as a condition of their plea agreement with the defendant, the government will recommend a probated sentence without any period of incarceration.

In delivering his decision, Sunia wanted to understand what probation really means to both attorneys.

“What do you really mean by probation?” Sunia asked.

“Probation is an option given to the defendant to reform. It's an…..opportunity given to a person to change his/her behavior, and to change from wrong to right.”

Sunia told both attorneys that, as they argue for a probated sentence, the court wants to know how Aiono is going to gain if he is placed on probation. Sunia pointed out that Aiono is no longer a police officer.

In many cases, Sunia pointed out, there are times the court orders that a defendant  attend counseling as a condition of probation.

“That’s why the court is asking, why are you asking for probation for this case?” Sunia asked both attorneys.

The judge said there is no other position in government that is higher than the position of a police officer, who are sworn to uphold the law and protect the safety of the community.

“Is probation a proper sentence for this case, given the circumstances of what happened and the totality surrounding what exactly happened?” Sunia asked the attorneys. “What happened inside DPS including misconduct between other police officers - we don’t know. Whatever happened on that day including the inappropriate touching by this defendant - we don’t know. However, those types of actions and misconduct that we were not able to see are now coming up.”

Sunia said there are a lot of issues in DPS. There’s a gender issue, a bullying issue, issues of misconduct, and issues with rank. Moreover, there have been allegations about misconduct by cops prior to this case being brought to the light.

“This is not the behavior you were sworn in as a police officer to do,” Sunia told Aiono.

Sunia said the court hopes the case against Aiono will serve as a warning, not just for cops but everyone else, that inappropriate touching inside the workplace is not allowed, and the court will not tolerate this type of behavior.

In the end, Sunia sentenced Aiono to 15 days in jail.

Uiagalelei requested the court to allow his client to go home to prepare his stuff before turning himself in to the TCF later in the afternoon. Sunia denied the request, ordering Aiono to be transported immediately to the TCF.

The case against Aiono surfaced when the female police officer filed a complaint against him with the DPS Internal Affairs (IA) in early April this year. According to the complaint, Aiono was a watch commander at the Tafuna Police Substation when the incident happened.

It took the IA only a week to conduct an investigation before a report was filed with the DPS Commissioner’s Office. Based on the investigation findings, Commissioner Le’i S. Thompson made the decision to suspend Aiono for five days without pay, without a recommendation to charge Aiono.

When Samoa News asked Le’i back in April about the case, an angry Le’i told Samoa News over the phone, that “sexual harassment is not a news issue.”

According to the government, the female officer was bent down, reaching into the fridge, when she felt someine touching her butt in a sexual manner.

When she turned around to see who it was, Aiono allegedly tried to kiss her on the mouth. She turned her face and Aiono's lips allegedly touched her cheek.

The government claims that Aiono kept at it; he allegedly reached for the victim's jaw and tried to turn her face her towards him, and that’s when he allegedly kissed her. The victim resisted and was able to push Aiono away before walking out of the room.

The victim shared her ordeal with her supervisor who verbally reported it to IA.

When asked by Samoa News, Aiono said, “Nothing like that happened. I did not sexually harass her nor did I make any inappropriate behavior against her. I was just playing around. It wasn't anything serious, it was like normal behavior that always happens in other workplaces when people play around with other co-workers, but nothing serious.”

A week after Aiono's case made headlines, another alleged sexual harassment case involving yet another cop surfaced. Former DPS officer, Emanuele Lito is accused of sexually harassing a female cop inside a police unit -in the presence of a male cop - and also inside the Fagaitua Substation last year.

Both Aiono’s and Lito’s cases were transferred to the AG's Office but before the government filed their cases in May of this year, both men resigned from DPS. The case against Lito, who is also facing third degree assault, is still pending in District Court.