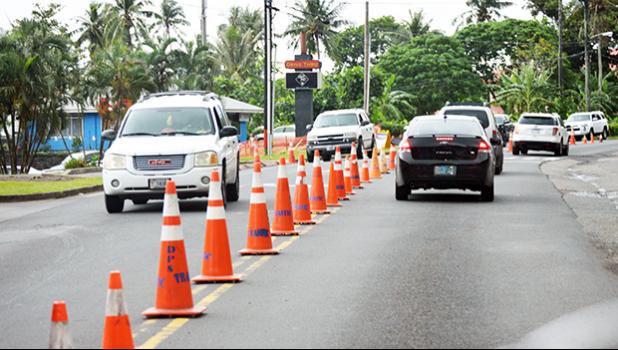 Pago Pago, AMERICAN SAMOA — Tualauta Representative, Larry Sanitoa has requested a hearing with officials from the American Samoa Government (ASG), especially the Public Works Director, Faleosina Voigt to explain to members of the House of Representatives the reason behind the decision by Governor Lolo Matalasi Moliga to remove the bus stop located in front of the Laufou Shopping Center (LSC) in an effort to address the problem of traffic jams almost everyday that seems to begin in this area.

Sanitoa told the chamber that he received numerous phone calls from members of the public including constituents voicing their concern regarding this issue.

According to Sanitoa, there are many reasons why vehicles are piled up on the road causing traffic jams in the morning and after work.

He said that he’s very sad to see that ASG moved to find a solution to the traffic problem without considering members of the community who don’t have vehicles but depend on buses for transportation.

He pointed out that people and businesses have rights under the law and ASG should have conducted a survey on how to deal with the problem of traffic before they made this decision.

Chairman of the House Public Works Committee, Rep. Loia Gutu echoed Sanitoa’s concerns and immediately scheduled a hearing with the Director of the Department of Public Works to discuss this issue.

Speaker of the House Savali Talavou Ale said everyone has the same feelings regarding the issue at the Laufou. He then told representatives to prepare their questions before the hearing

Saole Representative, Kitara Vaiau said that the wrong decision by ASG caused members of the community to post profanities against leaders of the government on social media. According to Vaiau, this is not a good sign for a nation that has a strong culture, and requested a hearing with the Acting Attorney General to tell members of the House what ASG must do to stop members of the community from continuing to continue this bad behavior.

In the Senate, Sen. Satele Galu Satele raised the same concerns during this past Monday’s session, and questioned the main reason why the Governor made such a “wrong decision.”

“Removing the bus stop in front of the LSC is not the answer to the problem, it’s created more problems and confusion to members of the public,” said Satele, adding that the real problem is “not enough parking spaces for vehicles on the side of the road.”

According to Satele, Lolo is more focused on the problem of traffic instead of doing something good not only to address the problem but also to make everybody happy. He stated that the public and businesses are the ones that are most effected in this decision.

For example, according to Satele, an elderly woman and her grandson after shopping at Laufou walked all the way to Tedi of Samoa (movie theatre building) in Nuuuli to catch a bus home. He said that it was heartbreaking when he saw the young boy try to hold up the umbrella to shelter his grandmother from heavy rains while they walked to the new location to catch a bus.

“Our people are suffering because of the decision by the governor,” said Satele. He then added, “Not every family has a vehicle, the majority of our people depend on buses as as a way of transportation, but when the government removes the bus stop where people used to wait for buses to go home, that tells a clear picture of a government who doesn’t care about the people,” Satele told Samoa News.

Lolo revealed at a cabinet meeting two weeks ago that he had given the acting Attorney General a proposed policy to resolve the traffic jams in front of Laufou, which should be enforced a week before schools start next month.

The governor also ordered that the bus stop across from CBT be removed and it’s been two weeks now since there’s been no bus stop at this location. He said this bus stop is usually full of students.

Lolo said six months ago he assigned someone to research the cause of traffic congestion in this vicinity . The research identified that there are not enough parking spaces at Laufou to accommodate the businesses in the building and this is what’s causing the traffic jams.

According to the governor the current parking spaces at Laufou are only enough for BlueSky and Carl’s Jr.

The governor instructed the Director of Commerce to inform the owners of Laufou of the requirements for parking spaces and give them 60 days to add additional parking.

Last week, the owners of the shopping center were informing the public about new traffic rules being enforced by police for vehicles entering and exiting CBT and Laufou..