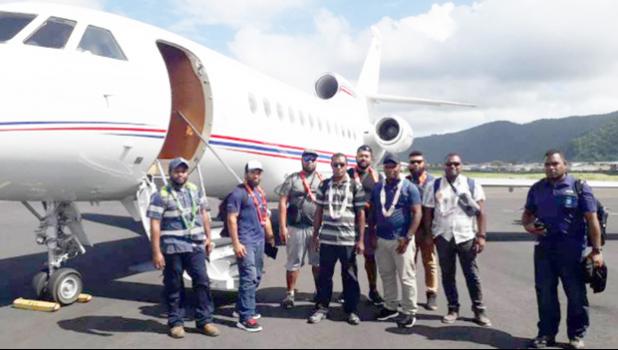 All of these observers were disembarked from United States fishing boats in Pago Pago, American Samoa over the past several weeks.

The repatriation exercise was financed by the American Tunaboat Association (ATA) member vessel owners and coordinated closely with the observers’ national programmes, and the FFA.

Those that were repatriated include 2 Fijians, 4 Solomon Islanders, and 3 Papua New Guineans. They are now being quarantined in different quarantine locations in their home countries since their arrival.

Another observer of PNG nationality, who was disembarked in Honolulu and transited through California and Brisbane, also arrived in Port Moresby on Tuesday this week.

Some of these Observers had been away from their home countries since December 2019 or early 2020 due to the closure of borders as a result of the Covid-19 pandemic.

In March, the FFA temporarily suspended the requirement for 100% observer coverage on all Purse Seine Vessels in the WCPO. The temporary suspension also calls for vessel operators to repatriate observers that were on their vessels.

Following the successful repatriation this week, FFA Director-General Dr Manu Tupou-Roosen said “FFA is sincerely grateful to the ATA Executive Director and its members for the hard work with the relevant national observer programmes and the FFA Secretariat to ensure the safe return of our observers.”

“The extraordinary situation we’re all faced with calls for closer cooperation, and this is a great example of this,” she added.

ATA Executive Director, William Gibbons-Fly said the repatriation of the observers has been a considerable challenge from the very beginning but it was one that the Association was committed to ensuring happened safely, and in as timely a manner as possible.

“I am pleased to say we received very strong support from the Governor’s office in American Samoa as well as the senior officials in the Departments of Health, Transportation, Immigration, and others,” Mr Gibbons-Fly said.

The ATA Executive Director said to ensure that the repatriation exercise ran smoothly they also worked very closely with the officials in Fiji, Solomon Islands, and Papua New Guinea, as well as with FFA staff.

“Without exception, everyone was tremendously supportive and cooperative,” he stated.

The successful repatriation flight follows the earlier repatriation of other observers that had been on US Treaty vessels and who were dropped off in their home ports in the region. This included a Marshall Islands Observer who was finally dropped off in Majuro port after going all the way to Mexico and back – a journey lasting several weeks.