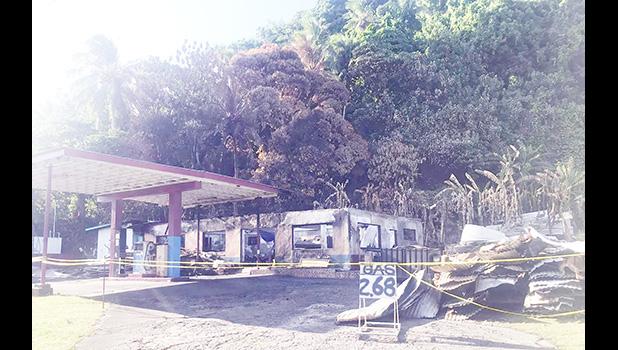 Pago Pago, AMERICAN SAMOA — The House DPS Committee is holding a hearing this week to discuss several issues regarding operations at the Department of the Public Safety (DPS), which includes the Fire Bureau Division.

Aua Representative, Faimealelei Anthony Fu’e Allen raised the matter about the fire at Pavaiai Elementary and requested a report. There was no school last Friday after a small fire broke out in the early hours in one of the classrooms. Reports from the school state that it was around 6:30a.m when the classroom of the Level 6 building caught fire and students were evacuated.

First responders from the DPS, American Samoa Power Authority (ASPA) and the Fire Bureau Division responded to bring the fire under control. It’s suspected faulty wiring caused the fire and there were holes in the ceiling of the classroom where the fire occurred but there was no other damage.

Faimealelei said faipule need to see a completed report explaining the cause of the fire.

He said that he also has issues with new police officers who have no respect at all when it comes to dealing with members of the public, pointing especially to elderly people and government leaders. He then requested a hearing to address this issue immediately.

Freshman lawmaker and chair of the House DPS Committer, Rep. Avagafono Vaimaga Maiava echoed Faimealelei’s comments, noting part of the problem is that the new Police Commissioner has not been confirmed by the Fono and that there are many issues raised by faipule throughout the week regarding the service of the DPS.

Vice Speaker of the House Fetui Fetui Jr interrupted and advised Avagafono that the authority and power to call a hearing is his, as chair of the committee. Furthermore, Fetui Jr, a former cop advised Avagafono to call the Acting Police Commissioner and his senior assistants who have been on the force for many years to appear before the committee to address a lot of these issues.

The Vice Speaker said he also wanted an update on the investigation regarding the case involving seven packages containing a crystalline substance that were discovered in the LBJ Hospital's mail several years ago and other issues regarding illegal drugs entering our shores.

It was in May of 2018 that DPS Vice & Narcotics Unit launched an investigation into the case where seven packages containing a crystalline substance that tested positive for methamphetamine were discovered in the LBJ Hospital’s mail.

Detectives reportedly traced the path the LBJ mail goes through when it arrives on island. In particular, the LBJ mail was found not to go through Customs checks and instead is delivered directly to LBJ's Procurement Division. The packages in question were apparently addressed to various divisions of the hospital including the nursing division, the Dept. of Health, and the DOH health centers in Tafuna and Amouli. It's understood that the drugs found in the 7 packages were valued at more than $400,000.

In the meantime, Vaifanuatele Representative, Lavea Fatulegae’e Mauga was deeply disappointed a few days after he raised the issue of the lack of a fire truck and EMS service for the Eastern District, when a fire at the gas station in Utusi’a destroyed the whole business building last Thursday.

He told faipule that the building could have been saved if there was a fire truck stationed at the FPS. He said that it was God’s love and protection that saved the lives of people who were working in the store.

PRESENCE OF THE NEWS MEDIA DISCUSSED

Sua #1 Representative Lua’itaua Gene Pan questioned the presence of members of the media during the House Session last Friday.

Samoa News was the only member of the media present during the House session last Friday.

Vice Speaker of the House who led the session responded saying that the media is always welcome inside the House chamber, anytime without permission.

“This is 2021,” Fetui Jr said, adding that, “there is no difference in the presence of the media during House sessions and Gafatasi Afalava.”

Gafatasi, a former lawmaker for Leasina District is one of two liaison officers from the Governor’s Office for the House of Representatives. The other one is Fiu Johnny Saelua, who was former Governor Lolo Matalasi Moliga’s chief of staff for 8 years.

When asked why he raised the issue during the House session, Lua’itau told Samoa News he wanted media representatives to be in the House chamber legally.

“There was a section in the House Rules saying that the media needed permission from the chair, so I just wanted the media to be included legally. So, that’s why I wanted to ask on behalf of the media,” Lua’itaua said.

According to the House Rules passed by faipule last week, “The Presiding officer may make temporary or permanent arrangement for the use or non-use of any portion of the House Chamber by members of the news media including the press, television and radio. The taking of pictures on the floor of the House chamber during a session thereof or the machine recording of the proceeding are prohibited except by permission of the presiding officer.”

One faipule said that he was shocked when the Sua #1 Faipule raised the issue during the session. He questioned the reason why the issue was raised at this time but was never discussed in past years.

Another faipule said that he fully supports the presence of the news media in both House sessions and hearings. He further stated that it’s about time to televise Fono sessions and hearings so that constituents have the opportunity to understand what is going on at the Fono.