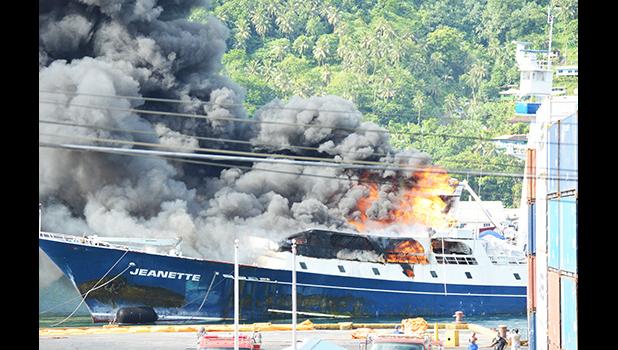 Probable cause: “inadequate crew training and oversight by the company”
By
Fili Sagapolutele
fili@samoanews.com

Pago Pago, AMERICAN SAMOA — The “probable cause” of the fire and sinking of the fishing vessel Jeanette last December was — among other things — “inadequate crew training”, according to a Nov. 8th federal investigation report by the US National Transportation Safety Board (NTSB), publicly released yesterday.

“The estimated property damage exceeded $15 million,” according to the report, in which NTSB investigators, worked closely with its counterpart from the US Coast Guard Marine Safety Detachment in American Samoa throughout the investigation.

The US-flagged vessel, which is home ported in American Samoa, is owned by C & F Fishing LTD, according to the report, which states that the crewmembers never sounded the alarm of the fire onboard.

The detailed report, states that was about 11:30 a.m local time on Dec. 5, 2018, that a fire started within the dry stores locker on board the fishing vessel, which was pier side at the container facility at the Port of Pago Pago, with 18 crew members and a vessel representative on board.

The vessel was out fishing and returned to port around Nov. 22 with 1,330 metric tons of tuna valued at $1.75 million. The vessel docked at the container facility to await its turn to offload its catch at the StarKist Samoa cannery.

The vessel had on board an estimated 90,000 gallons of diesel fuel, 300 gallons of aviation fuel, and 12,000 pounds of anhydrous ammonia for its cargo refrigeration system.

Prior to Dec. 5th, the captain, chief engineer, and the mate left the island to attend medical appointments and take vacation time until the vessel was ready to return to operations. And this was not uncommon for the senior officers.

During this time, the remaining crew planned to conduct scheduled maintenance, including hull repairs and engine upkeep. The remaining crew was given the work list of priority items to be done.

One of the work list items was to remove wasted sections of the overhead frames on the wet deck and weld in new sections.

At 7:30 a.m, three crewmembers entered the vessel’s wet deck, and the welders began conducting their “hot work” — which includes any work that involves using fire or spark-producing tools.

According to the report, crewmembers took their morning break from 9 a.m to 9:30 a.m, in which the “fire watch” person left the area of the “hot work”, with no one relieving him. After the break, the crewmembers returned to the wet deck and continued their work.

Upon opening the door to the locker, the crewmembers saw that the items stored in the space were on fire. The crew responded by utilizing handheld dry chemical extinguishers to try to put out the fire.

“Initially, the crew was successful in their effort to extinguish the fire, but the smoke soon began to overwhelm them, so they retreated from the interior of the vessel,” it says. “The door to the dry stores locker was left open, which allowed the fire to re-ignite and spread.”

The report revealed that after the discovery of the fire, “the crew never sounded the general alarm, nor did the crew muster and organize to fight the fire.”

Instead, the crewmembers who were on board at the time were told verbally that there was a fire.

After becoming aware of the fire, crew members located on the bow attempted to access the bow entrance corridor within the main deck to move aft, but were pushed back by heavy smoke and instead had to go up and around the pilothouse to the stern of the vessel, where hoses were being setup, it says.

A crewmember then notified local fire officials around approximately 11:22 a.m.

“While the first fire truck arrived on scene at 11:36 a.m, the firefighters were not equipped with self-contained breathing apparatus (SCBA) to enter the smoke-filled vessel,” the report said, adding that “one of the vessel’s crew donned an SCBA from the aft fire equipment locker, but since the crew member was not wearing a firefighting suit, he was unable to approach and attempt to extinguish the growing fire due to its heat.”

Two hours after the first fire truck arrived on scene, a second fire truck arrived at 1:20 p.m with six SCBAs and two spare air bottles. The shore side firefighters made initial entry through the rear corridor (aft of the dry stores locker on the main deck) using their SCBAs and began firefighting efforts using a 1½ inch fire hose supplied from the shore fire truck.

The tugboat Iseula responded on scene and applied their water monitor to the starboard side wheelhouse of the Jeanette to suppress the flames.

A second fire team from the shore side fire department entered the vessel and was able to extinguish the fire located in the dry stores locker, but the fire team had to exit the space due to low air alarms on their SCBAs.

“Fire continued to burn in the rest of the vessel, and due to the lack of spare air bottles for the SCBAs, the decision was made to abandon onboard firefighting efforts, and the vessel was evacuated,” the report says, noting that since the fire could not be controlled, “and the vessel’s ammonia, fuel, and lube oil posed a significant hazard to the port”, the Port Administration, in consultation with the Coast Guard, ordered the vessel to be towed out of the harbor.

The tugboat Iseula was able to attach its towing line to the Jeanette’s bow, and firefighters used fire axes to sever the vessel’s mooring lines at the dockside bollards.

At 3:52 p.m, more than four hours after the fire was discovered, the tug Iseula towed the burning Jeanette out of the harbor and headed south into the Pacific Ocean with the tug Sailele escorting.

Around 1a.m, on Dec. 6th, while the Jeanette was still on fire and under tow, the purse seine netting burned away underneath the skiff, and the skiff slid off the stern of the vessel, causing the fishing vessel’s crane boom and power block to swing to port and rest on the port side bulwark, and the vessel listed to port.

Over the next nine hours, the vessel’s port list increased as water entered the open 8-by-8-foot port loading deck hatch. At 10:32 a.m, the Iseula released the tow line as the Jeanette listed further to port, and at 10:39 a.m, almost twenty-three hours after the fire was discovered, the fishing vessel sank in open water about 15 miles offshore.

“A slight oil sheen was observed in the area following the sinking,” it says.

NTSB “determines that the probable cause of the fire and sinking of the fishing vessel Jeanette was inadequate crew training and oversight by the company to ensure safe hot work practices were followed on board the vessel,” the report said.

“Contributing to the spread and growth of the fire was the lack of a clearly designated person in charge during the response, which resulted in an ineffective firefighting effort by the crew,” it says.

(Samoa News will report in future editions on other details in the report.)