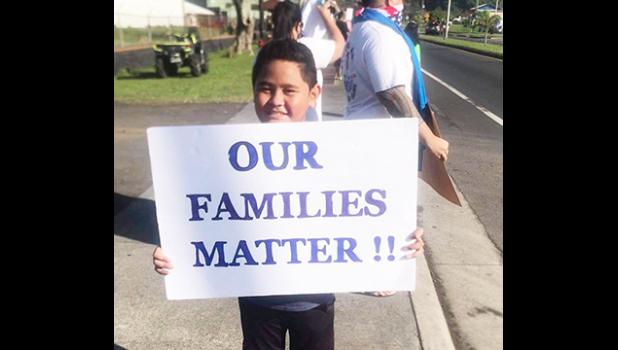 No COVID-19 case in our borders, despite rumors
By
Samoa News staff
reporters@samoanews.com

Pago Pago, AMERICAN SAMOA — Close to 50 members of the community (including infants and babies) gathered in front of Tropical Pizza in Tafuna, early Saturday morning, to show their strong support for the Tagata Tutu Faatasi Alliance of Amerika Samoa (TTFAAS), an alliance comprising 500+ residents of American Samoa, who have been stranded off island, since border closure in March of this year.

Armed with signs to deliver their message — like “Repatriation Not Open Borders” or “Bring Our Families Home” — the group formed a ‘wave’ calling out to Governor Lolo M. Moliga, to please bring their parents, grandparents, brothers and sisters, home.

According to members of the TTFAAS, they are not asking for the Territory’s borders to open up, they are only asking they be allowed to return home to family and children.
The wave was spearheaded by some of the stranded residents’ children, Brittany Duane, KJ Ameperosa, Saualofa Ale-Failautusi, Tanya Ma’o-Aab, Amete Mulipola and Vasati Fitiausi.

During the presentation, Motusa said many residents have called regarding a repatriation flight from Hawaii and the US mainland. And DoH’s plan will be presented sometime next week to the task force chairman before submission to the governor and lieutenant governor.

DoH’s plan would require a 10-day quarantine period in Hawaii with COVID-19 testing in Honolulu and the Pacific Health Officers Association (PIHOA) — a professional organization in which DoH is a member — will assist with making arrangements for testing with already identified medical doctors in Honolulu.